from the walls we create for ourselves 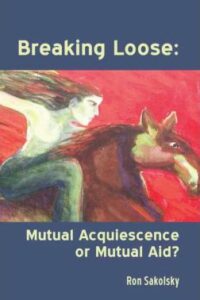 Longtime Fifth Estate contributor Ron Sakolsky offers a short exploration of his concept of “mutual acquiescence.” For Sakolsky, the term seeks to understand how alienation and oppression are connected in everyday life, creating a “wall of domination” that prevents us from seeing another reality beyond the existent.

It’s a concept that builds a bridge between Surrealist and anarchist thought by looking at the ways in which our belief in the impossibility of revolt—mutual acquiescence—limits us to the belief that misery is the only potential reality. Despite this view, Breaking Loose is decidedly optimistic and the discussion is aimed at helping the reader understand the concept of mutual acquiescence in order to overcome it.

It acts as the glue that holds alienation and social control together. Furthermore, rather than control and mediation being something only enacted from above, mutual acquiescence helps us to understand the ways in which we help foster the process from below. It’s a helpful reminder that to some degree, the state is composed of the interactions between us, and that as such, it may be more vulnerable than it would otherwise appear to be when conceived of as a monolithic entity that stands towering over us.

Sakolsky argues that events such as the Occupy movement and the Ferguson rebellion are acts of mutual aid based on creation, refusal, and insurrection that offer alternatives to the submission and resignation of mutual acquiescence.

There is also an interesting discussion of the Orange Alternative in Poland in the 1980s which expands on the author’s article in the Winter 2016 Fifth Estate. The effort—a carnivalesque practice of revolt aimed at ridiculing and undermining the Soviet Union—is an inspiring example of the types of resistance invoked throughout the book.

Additionally, Sakolsky introduces the idea of “inspiration zones” such as the ZAD in France and the Unist’ot’en blockade in so-called Canada which by demonstrating the possibility of relationships based in mutual aid, challenge the idea of mutual acquiescence.

One of the most pleasantly surprising aspects of Breaking Loose is the depth of engagement Sakolsky has with anarchist theory and writings. He not only looks towards the past—especially the writings of Landauer and 19th century individualist anarchist Max Stirner—but also has a strong familiarity with contemporary anarchist writing.

This engagement is particularly inspiring as it shows a way in which anarchist theory coming from diverse quarters can be expanded on and used to enhance our collective understanding. Sadly, there isn’t enough of this going on, but perhaps after reading Breaking Loose more people will be moved to do so. The anarchist milieu would be much better off if this type of discourse happened more often.

Breaking Loose is an inspiring book, both for its optimism in the belief that “we all hold a piece of the puzzle called anarchy” and for its example as a means of doing and writing anarchist theory.

In an era of defeatism and resignation within the wider society and often within anarchist circles, it’s a refreshing reminder that small steps towards anarchy are possible.

Ruhe lives in the occupied territory currently known as Michigan. They are involved in the anarchist zine distro, sproutdistro.com.