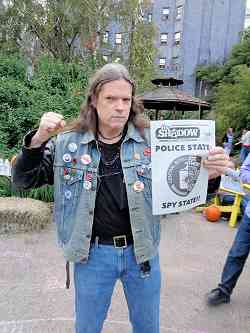 Bob McGlynn, a longtime fighter, organizer and visionary in New York City’s anarchist scene, who became known internationally for his solidarity work with activists in the East Bloc, died of a heart attack Aug. 23 at his home in Yonkers. He was 60 years old.

With his long hair, army boots, sleeveless denim jacket and prize-fighter’s build, McGlynn could be taken for a biker. But he was motivated by an intense idealism.

Bob’s long and varied activist career began in the early 1980s with the Brooklyn Anti-Nuclear Group (BANG), which was organizing to shut down the Indian Point nuclear power plant north of the city. His artistically crude, but politically sophisticated cartoons gave the BANG newsletter a punk aesthetic.

In this same period, he began working as a bicycle messenger, which also thrust him into political activity. Faced with police harassment and city government attempts to oppressively regulate cyclists, in 1982 he organized the first bike messengers union in New York, the Independent Couriers Association.

McGlynn was on the frontlines of this successful struggle-the ban was overturned as unenforceable. Bob McGlynn proudly called himself the “King of All Bicycle Messengers.”

Bob was again facing off with police in the streets when the city attempted to impose a curfew in Tompkins Square Park in 1988. That set off three years of class war on the gentrifying Lower East Side, with squatters, anarchists, and the homeless fighting the cops in an endless series of angry protests and riots.

But McGlynn’s special passion was building ties of solidarity with anti-nuclear, anti-militarist and ecological activists in countries under the Soviet Union’s domination; challenging work in the paranoid and polarized atmosphere of the Reagan Cold War era.

In 1983, Bob and several friends formed a New York sister organization to the Moscow Trust Group. The Trust Group, with its unassuming name, was created by Moscow activists as an acceptable cover to advocate for nuclear disarmament. Now linked with a U.S. organization, the Moscow activists had greater visibility, and were less vulnerable to being interned or disappeared by Soviet authorities.

In 1986, in the wake of the Chernobyl disaster, McGlynn and his Trust Group collaborator, Ann-Marie Hendrickson, joined with two activists from the UK to travel to Moscow-smuggling in Russian-language flyers on the dangers of radiation and a banner reading, “No more Hiroshimas, No more Chernobyls-Peace and Environmental Safety for All.”

They scheduled the action for early August, timed for the Hiroshima anniversary. The activists promptly headed to Moscow’s Gorky Park where they unfurled their banner and began distributing the leaflets. Bob and the others were quickly arrested by the KGB. After a few days in custody, they were deported, but the action won international media coverage.

Back in New York City after this escapade, McGlynn helped transform the local Trust Group into Neither East Nor West (NENW)-dedicated to supporting anti-authoritarian opposition forces not only in Russia but throughout Eastern Europe.

As the Cold War entered its endgame, such groups were fast gaining ground and NENW organized campaigns and demonstrations to support East Bloc activists faced with imprisonment or persecution-raising their international profile to give them more political space.

NENW gave special emphasis to linking activist struggles in the East Bloc and the U.S.-for example, getting activists in Moscow, Minsk and Warsaw to protest at their local U.S. embassies to demand freedom for Kenny Toglia, a New York activist facing charges in the Tompkins Square riots.

NENW was always clear on advancing a politics that rejected both superpowers.

During this period, McGlynn saved his money he worked hard for as a bike messenger to travel to Eastern Europe, meeting and networking with activists in Poland and Slovenia (then part of Yugoslavia).

NENW’s newsletter was an important networking tool in those pre-Internet days. It was called On Gogol Boulevard, for Moscow’s artistic and alternative scene hangout, and was mailed to contacts around the world.

It later became an insert that appeared in anarchist publications including Fifth Estate, The Shadow, Love & Rage, and Profane Existence.

The Cold War came to an end, but NENW remained active for several more years, especially doing support work for anti-war activists in all the ex-Yugoslavia republics. McGlynn was also involved in support work in this period for persecuted members of Nigeria’s anarchist-oriented Awareness League.

Although mostly masked by pseudonyms, McGlynn’s persona was an animating force in the 1980s zine scene. With Ann-Marie Hendrickson, he was one of a group known as the Marginals that produced the ultra-irreverent political humor zine, Shoe Polish Week. Bob often wrote under the by-line of his nihilist alter-ego, Joey Homicides.

In the late 1990s, McGlynn retreated from Brooklyn to his childhood home of Yonkers and withdrew from the activist scene to deal with health problems. He had long been on pain-killers after throwing out his back as a messenger.

Accustomed to an extremely active lifestyle, accommodating to physical limitations also posed psychological challenges for him.

However, Bob recently emerged from his period of withdrawal. He wrote a brief political memoir of NENW, which appeared in the Spring/Summer 2014 edition of the Fifth Estate.

In February 2015, at a NENW reunion party held in Manhattan, McGlynn spoke enthusiastically of reviving the group in light of the war in Ukraine and renewed US-Russia rivalry. The group later that year issued its first public statement in years, in support of Syria’s revolutionary Kurds.

Bob McGlynn, who is survived by his longtime partner Joanna Pizzo, will be remembered for his boundless love of freedom, his ruthless single-standard politics, and intransigent hostility to all dictatorships and superpowers.

“The Psychiatric Industrial Complex: Another Anti-Authoritarian Put Away” by Bob McGlynn, FE #397, Winter 2017.

Search FE for articles on Neither East Nor West and On Gogol Boulevard.