Self-defense based on mutual aid & solidarity 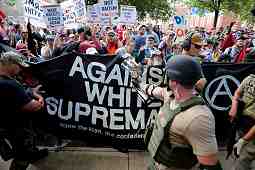 The rising tide of fascism and organized political violence of the Right, particularly the mobilization of street-level right-wing forces, such as the Proud Boys and the Oathkeepers, have returned the question of self-defense to the center of anarchist and antifascist concerns. This has become more burning following the brutal fascist mobilization and violence in Charlottesville, Virginia in August. The murder there of Heather Heyer by a neo-Nazi gives the issue of self-defense life or death importance.

The present period demonstrates the inescapable necessity of anarchists engaging in self-defense training. But it also shows that this is insufficient if it remains on an individual basis. The current context of rising tides of alt-right threats underscores the need for self-defense on a collective and organized basis of mutual aid and solidarity.

There are already some forms of collective defense anarchists can draw on. One of the most familiar among anarchists in recent years has been the Black Bloc tactic. It originated as a means for countering fascists and police in Germany in the 1980s, where it provided crucial defense for squats that were subject to disruption or attack by both.

Obviously, the Black Bloc in North America has been highly effective in street demos and protests. But it does not translate directly to regular, day-to-day neighborhood defense. Wearing a mask or black bandana is not the best way to introduce or ingratiate yourself to your neighbors. The anonymity that is necessary in street demonstrations is counter-productive, even self-defeating, in the context of building neighborhood solidarity and protection.

Anarchist organizing against fascists and white supremacist groups in the period from the 1980s through the early 2000s was largely carried out by Anti-Racist Action (ARA), founded in Minneapolis. ARA groupings were active in numerous cities in North America.

ARA was organized largely as a reactive street fighting force of anti-racists who were willing to take risks confronting fascists when they gathered publicly or at events like concerts. Though not regimented and trained militarily as a fighting force for self-defense, ARA was made up of committed people ready to fight to break up public fascist presence. While some members of ARA practiced martial arts, it was not always the case that ARA as a whole did systematic training. Nor did they organize on the basis of ongoing defense formations. Action tended to be spontaneous and reactive.

Reliance on reactive or spontaneous defense is often the case in antifascist actions today, carried out through quick responses to the fascists. In free-for-all assaults on them such as frontal charges, there is little strategic or tactical preparation or discipline.

Over the years, there have been various projects for martial arts training among anarchist and antifascist activists, spaces, and communities. At the Anarchist Free Space and Free Skool in Toronto, this was provided along with classes on anarchism. Notably, there was some sense among Free Skool participants and collective members that the martial arts courses were less necessary or relevant than theoretical and historical ones.

For some anarchists, another self-defense practice takes the form of Copwatch patrols. Copwatching involves organized surveillance—grassroots observation from below of authorities as opposed to the top down surveillance by authorities.

In Surrey, near Vancouver, we have initiated copwatching crews to record, document, and publicize the violent actions of Royal Canadian Mounted Police (RCMP) officers and City bylaw enforcement officers against homeless people. As these actions have been publicized, police have changed their actions considerably, becoming less abusive. At least one bylaw enforcement officer has been canned.

A Basis for Defense

The structural basis for a defense organization is already provided by the example of the labor flying squad utilized by the Industrial Workers of the World (IWW) at the start of the 20th century. A defense force on these lines could be mobilized quickly through a phone list accessible to all members.

Not only does it allow for quick deployment, it also builds on pre-existing relationships of trust and action. Members know each other and have important experiences working together during political actions, protests, and/or workplace strikes and pickets. They also typically have relationships of activity and trust with people in other social movements and community organizations, such as anti-poverty or migrant defense groups. Such was the case in Toronto with various, both union-based and autonomous flying squads and relationships with the Ontario Coalition Against Poverty.

Training can be extended throughout a given community or neighborhood, thus providing spaces and practices of solidarity building. On a larger basis they can provide alternatives to statist intrusions on communities. Doing so would involve developing self-defense on a broad, more regular, community basis.

Community self-defense is an important expression of mutual aid, the basic anarchist impulse and organizing principle.

Solidarity on this basis moves beyond dependence on the state for protection or response to crisis. It helps people develop relationships, skills, and confidence to support community members rather than turning to the authorities. It also helps break the reflex response of looking to the state to address social problems or threats.

Anarchists should not have illusions they can satisfactorily meet community needs for protection at this point. There is much work to be done and many cities with anarchist movements have minimal self-defense capacities. This is a real challenge to anarchists.

It is impossible to speak meaningfully of alternatives to the state and to provide compelling evidence to people that anarchism offers something of a realistic or practical alternative if these resources and capacities are not developed. It does not provide a bridge from the current state of affairs to anarchism if such needs cannot be met in an anarchic manner.

And it leaves people unconvinced. This is not to say that full self-defense capacities must be achieved. But more work needs to be done to approach an effective and compelling level of community care.

Self-defense efforts offer an important means for bringing non-anarchists into relationships with anarchists. People will become involved in protective efforts against fascists and/or against police violence even if they have not identified themselves as, or will not ever see themselves as, anarchists.

Jeff Shantz is an anarchist community organizer in Surrey, British Columbia. His web site is jeffshantz.ca.