As we face the storms (both literal and figurative) of 2017, we offer a poem by Voltairine De Cleyre, dedicated to the memory of the May 1886 Haymarket strikes and demonstrations in Chicago, and especially to the anarchists murdered for their beliefs by the state. 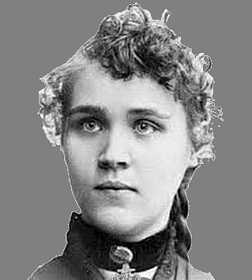 De Cleyre was born in 1866 into a poor family in Leslie, Michigan. Schooling at a Catholic convent convinced her to reject all religion, and she became a free thinker, dedicated not to God, but to humanity.

In 1886, De Cleyre began writing for a Michigan-based free thought weekly, The Progressive Age, and earned money by lecturing on the free thought circuit throughout the state.

The May 1886 Haymarket labor protests and the execution of the accused anarchists inspired her to learn about their ideas and become a lifelong anarchist.

De Cleyre was deeply involved in the American anarchist movement from 1890 on, fighting for the emancipation of women, libertarian education, the struggle against the exploitation of labor, the need for self-liberation, and direct action against oppression. She helped foster connections between anarchists born in North America and poor Jewish immigrants by teaching them English.

During her short life (she died at 45) De Cleyre wrote many articles and poems, sketches and stories for radical journals, including Lucifer, Free Society, and Mother Earth. Nearly every year she took part in memorial meetings for the Haymarket anarchists, contributing moving speeches.

For the epigraph of her poem, “The Hurricane,” De Cleyre quoted the prediction of one of the executed Haymarket anarchists, August Spies, that the rebels of today hold the promise of a better future for the world.

“We are the birds of the coming storm.” —August Spies (Haymarket Martyr)

The tide is out, the wind blows off the shore; Bare burn the white sands in the scorching sun; The sea complains, but its great voice is low.

Bitter thy woes, O People,     And the burden Hardly to be borne! Wearily grows, O People,     All the aching Of thy pierced heart, bruised and torn But yet thy time is not,     And low thy moaning. Desert thy sands! Not yet is thy breath hot,     Vengefully blowing; It wafts o’er lifted hands.

The tide has turned; the vane veers slowly round; Slow clouds are sweeping o’er the blinding light; White crests curl on the sea,-its voice grows deep.

Angry thy heart, O People,     And its bleeding Fire-tipped with rising hate! Thy clasped hands part, O People,     For thy praying Warmed not the desolate! God did not hear thy moan:     Now it is swelling To a great drowning cry; A dark wind-cloud, a groan,     Now backward veering From that deaf sky!

The tide flows in, the wind roars from the depths, The whirled-white sand heaps with the foam-white waves; Thundering the sea rolls o’er its shell-crunched wall!

Strong is thy rage, O People,     In its fury     Hurling thy tyrants down! Thou metest wage, O People.     Very swiftly, Now that thy hate is grown: Thy time at Last is come;     Thou heapest anguish, Where thou thyself wert bare! No longer to thy dumb     God clasped and kneeling, Thou answerest thine own prayer.