A year of healing & resistance for Seattle shooting victim & community 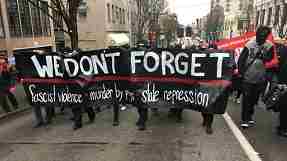 January 20, 2017, the day Trump officially became President of the United States, was filled with many acts of defiance as well as foreboding.

This day had an additional sinister meaning for anarchists in Seattle. In the name of the liberal concept of free speech, and ignoring months of warnings and protests by students, workers, and faculty, the University of Washington’s administration permitted an appearance by the vicious arch troll and bigot, Milo Yiannopoulos. Previous appearances elsewhere clearly indicated that the worst was to be expected from him and his supporters.

As reported in our Summer 2017 issue (“An Anarchist is Shot in Seattle,” FE #399), Hex, an IWW organizer, anti-fascist and anarchist, was shot by a Milo supporter. Severely wounded, he was put in intensive care and nearly died.

Elizabeth and Mark Hokoana, the right-wing shooter and her accomplice, are charged with first degree assault and third degree assault respectively. No trial date has been set yet.

Though left with permanent injuries and traumatized, Hex has remained part of anarchist and anti-fascist struggles in Seattle. Friends and comrades have rallied in support, while contending with their own shock and injuries related to the inauguration day events.

To mark a year of healing and resistance, the Seattle IWW’s General Defense Committee organized an event at the scene of Hex’s shooting. Titled, “We Don’t Forget—Rally and Noise Demo in Remembrance and Solidarity,” it took place on the UW campus, Saturday, January 20.

A large multicultural and multi-generational crowd formed, fortified by hot coffee and bagels. Copies of the Fifth Estate were shared, too. A sound system cranked out inspired music; many danced. Spoken prose and poetry reminded all present—including a throng of university and city cops—of our sadness and anger, and our determination to continue in the struggle.

To conclude, a march wound around the campus and into nearby streets. Accompanied by large banners, highly-amplified protest music, chants of “We Don’t Forget,” and large quantities of multi-colored smoke, it was joined by many pedestrians.

There is a recent interview with Hex on Crimethlnc’s The Ex-Worker podcast at crimethinc.com/podcast/62/transcript