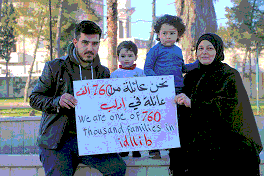 A family in Idlib Province, Syria, home to three million people, half of them displaced, or forcibly evacuated. Idlib was recently captured by hard-line Islamists. The sign reads “We are one of 760,000 families in Idlib.” / #HumansOfIdlib

If 2011 looked like the moment when people could unite, both within and across countries, to topple decades-old dictatorships with the demand for freedom and social justice, today looks like the moment of counter-revolutionary success. After eight years of increasingly brutal conflict in Syria, Bashar al-Assad still presides as president over a now destroyed, fragmented and traumatized country. The dominant narrative is that the war is nearing its end. States once vocally opposed to Assad now have other strategic concerns which take precedence over the victims of his savage efforts to hold onto power. Yet, on the ground, conditions are far from stable and civilians remain trapped and are paying the price for ongoing struggles for power and territory between the regime, foreign states and ideological war lords.

Trump’s announcement (by tweet) in December, that he planned to withdraw US troops from Syria, led to panic among many Syrians, and precipitated a new wave of jostling between international and regional powers. The Kurdish YPG-led Syrian Democratic Forces (SDF), which have been working together with the US in the fight against ISIS and are now in control over a large territory in the north and east of the country, have been abandoned.

Without US backing, they are unlikely to maintain a presence in Arab majority areas in eastern Syria, and Trump’s announcement sent waves of families fleeing SDF controlled towns in the Deir Al Zour countryside towards opposition controlled areas in the north. They fear that the regime and Iranian militias will take over and exact retribution on those perceived as dissidents.

Protests have broken out against the SDF in Manbij, Tabqa and Mansoura. People are angered by SDF negotiations with the regime, as well as long-standing resentments relating to a lack of adequate service provision, arbitrary arrests and forced conscription. Some have called upon Turkey to intervene to protect them. There is also the fear of ISIS resurgence.

Despite Trump’s boast that the terror group had been defeated, the war continues. On 18 January, the Syrian Network for Human Rights reported that International Coalition war planes killed at least 15 civilians, including six children, in Al Baghouz Tahtani village in Deir Al Zour.

In Kurdish majority areas, the fears are different. Turkey, long an enemy of Kurdish autonomy both at home and abroad, has announced its intention to intervene to establish a “safe-zone” in the north-east of the country.

Turkey’s main aim in Syria, having long since abandoned rebels in the fight against the regime, has been to prevent Kurdish control along its border and establish an area for returning Syrian refugees, some 3.5 million of whom are currently residing in Turkey.

Last year, Turkish and allied rebel forces took over Afrin, a Kurdish majority area formerly under the control of the PYD, which Turkey considers a terrorist group. The occupying forces have carried out obscene acts of violence against the local population including the looting of Kurdish homes and businesses, forced displacement, kidnappings, assassinations and rape.

Kurdish leaders have rejected the idea of an expanded Turkish presence and instead have requested international protection. Without this, they may be faced with little choice but to negotiate the return of regime control and therefore place their faith in those that Kurds in their thousands rose up to over-throw in 2011.

Elsewhere the situation is no better. In January, the powerful hard-line Islamist group Hayaat Tahrir al-Sham (HTS) declared war on rebel groups and captured much of opposition held territory in Idlib, parts of Aleppo and Hama. The HTS-affiliated Salvation Government, which has been accused of corruption, imposing hard-line Islamist rule, wide-spread arrests and arbitrary killing of opponents (both civil activists and rebel fighters) is attempting to take over all civil institutions.

Local councils, Free Syria Police Forces, university students and medical workers have protested such attempts, stressing their independence and neutrality from any armed group. Western donors have withdrawn funding for civil society activities and humanitarian aid, fearing it may end up in HTS hands, a designated terrorist group, leaving the health care system and provision for internally displaced Syrians currently facing severe winter storms, on the brink of collapse.

With HTS now in control, Assad and Russia may break the cease-fire deal and justify an attack on the province in the name of the War on Terror, with disastrous consequences for the three million civilians who reside there. As I write, regime shells rain down on the small town of Maarat AlNu’man, famed for its resistance to both the Assad regime and HTS, leaving casualties and destruction in their wake.

Despite the desire of many countries to rid themselves of their “refugee problem” by suggesting that stability is returning, the situation in regime-controlled areas is also catastrophic. In Deraa in the south, and eastern Ghouta near Damascus, the return of the regime has meant a return of “the Kingdom of Silence and Fear.”

There are ongoing mass arrest campaigns and forced conscription to regime forces (despite amnesty deals which accompanied the “reconciliation” process for those who chose to stay rather than be forcibly displaced from their homes). Resistance to the regime has re-emerged in Deraa including protests, graffiti and assassinations of pro-regime fighters and local figures that were involved in the reconciliation process who are now accused of betrayal.

The living conditions in these areas are desperate as both international and local NGOs which provided services and employment opportunities in the face of local economic collapse, ceased operations following the regime takeover.

In regime-controlled Aleppo and Damascus, shortages of gas, oil and electricity and the monopolization of goods and services by regime militia who are charging exorbitant prices, has led to widespread public criticism of the regime even among its loyalist support base. Many Syrians who fled or were forcibly displaced from their homes fear not only arrest if they return, but that they no longer have homes to return to.

Laws have been put in place to expropriate property in formally rebel-held communities, and to transfer it to loyalist hands under the pretext of reconstruction and development. The working class suburbs which were hotbeds of resistance are to be turned over to luxury malls and high end development, providing homes for those whose loyalty to the regime is not in question.

For many Syrians there can be no stability, much less peace, while those responsible for the country’s destruction remain in power. In recent months Syrian families have been learning the terrible fate of their loved ones, as the regime has issued death notices to civil registries of thousands of people who have been killed in regime detention.

Many of those killed were activists arrested in 2011 and 2012 including non-violent advocate Yahya Shurbaji and his brother Ma’an who were among 1,000 people from Daraya tortured to death in jail. Another executed was Layla Shweikani, a young woman from Chicago who travelled to Syria to help those displaced by the conflict and was detained in Damascus in 2016.

Tens of thousands of Syrians remain detained or disappeared. Syrians continue to demand justice and accountability for all those responsible for war crimes and mass human rights violations, yet the world seems increasingly impervious to their calls.

In Syria, and elsewhere in the region, revolutionary uprisings and inspiring experiments in grass roots democracy have been crushed by counter-revolutionary forces. Yet popular anger has not dissipated.

None of the factors which caused the uprisings have been resolved and the situation has deteriorated socially, politically and economically. Peace and freedom remain as elusive as ever.

Leila Al Shami is co-author, with Robin Yassin-Kassab, of Burning Country: Syrians in Revolution and War, Pluto Press 2018. She has worked with the human rights movement in Syria and elsewhere in the Middle East.