The Anarchist Art of Robert Henri

by Quincy B. Thorn

The inflated effigy of a head of state, dressed in nothing but a diaper, floats over a joyous crowd of protesters on a sunny day. Beneath the surface description, two spirits can be perceived, the vile spirit of a deranged despot and the angry but hopeful and playful spirit of collective refusal.

Images such as this appear in current protests against the rule of racketeers like Trump. They are artistic weapons wielded against repressive reality, a part of radical history we are privileged to experience directly. In opposing authority, it is important to explore many cultural expressions of revolt, their past as well as present incarnations. 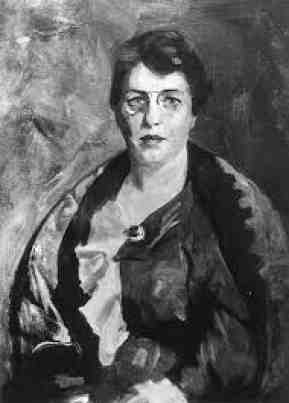 Emma Goldman sat for three portraits painted by Henri in 1915 following her release from jail for propagating birth control. In the 1930s, Henri’s next of kin, Violet Organ, destroyed all three for reasons unstated.

Readers of the Fifth Estate may be aware of the role played by anarchists in movements leading to the beginnings of modern art, especially in Europe. In this country, the work and ideas of the painter Robert Henri (1865-1929) is overdue for serious attention by today’s rebels.

Henri (pronounced hen-rye) occupies a place in conventional art history, being duly appreciated esthetically by bourgeois critics. But overlooked is Henri the anarchist rebel whose ideas were (and still are) threatening to the status quo.

The visual qualities of his paintings speak strongly to anti-authoritarians, and are appreciated as “painting one’s own time,” in the words of Gustave Courbet, who was known for his painting of popular subjects and his prominent role in the Paris Commune of 1871.

The meaning of Henri’s work can be rounded out by familiarity with his influences and the views he came to as he matured.

As a student at the Pennsylvania Academy of Fine Arts in Philadelphia in the 1880s, Henri became critical of the emphasis on technique rather than striving to express the spirit of what was to be painted.

From 1888 to 1891, Henri continued his art training while living in Paris, during a time of turmoil and change. In defiance of the official Salon tradition, the Impressionists had already been holding exhibitions without juries or prizes; there were also ongoing shows hosted by “les independants.” After visiting one of these, Henri confided to his diary that they were places “where everyone can express himself in paint as queerly as he sees fit. He can see nature with as wonderful eyes as he will.”

This democratizing process was important to the young Henri. Then there were the anarchists. Anarchism in France was surging at the time he came on the scene, with Paris becoming a major base of activism.

Calling for direct action to dislodge bourgeois democracy and overthrow capitalism, anarchists found growing popular support. With declared goals of massing workers’ voices against the employers, they were a major influence in many branches of the recently-formed Parisian Bourse de Travail, working class organizations that encouraged mutual aid and self-organization.

French Anarchist periodicals such as Le Révolté strongly supported cultural movements attempting to reintegrate art into everyday life. They were sympathetic to dissident artists, who, like themselves, were ostracized for not following mainstream norms.

By the early 1890s, the revolt of the artists in France had substantially merged with the rebellion of anarchists. All were looking forward to a social transformation made by and making possible the integration of art and life. It was common for painters and writers to become associated with anarchist movements.

Henri’s daily life became a mixture of art school and street-level experiences of state violence against socialists and anarchists. He noted in his Mayday 1890 diary, “…streets full of people and soldiers…squads of policemen and cavalry kept everyone moving—not the smallest group allowed to collect…saw many men…roughly handled, many arrests, the police using swords and fists, at any cries of ‘vive’ or ‘A bas.’ [Long live… or down with…].”

At the time he was witnessing official abuse of poor and marginalized people in France, Henri also had regular access to American publications sent by family and friends. Accounts of class exploitation and repression in the U.S. fueled his outrage and opened the way for global understandings of the scourge of industrial capitalism. This was practical learning that would nourish his later activism and art.

After returning home in 1891, Henri continued painting and criticizing the art establishment, as well as strengthening his ties with anarchists in the U.S. and France.

A common view of radical movements in the U.S. during that period attributes them mainly to the activities of immigrants; but the American-born Henri was also deeply involved in cross-fertilization of experiences and movements between countries and continents.

Henri pursued his artistic and social ideals; in addition to painting he became an outstanding art educator and writer. In 1909 in New York, at the urging of students, he founded an art school. Attendees were encouraged to work independently, to explore their individuality and evoke the spirit of their subjects in their work.

In 1911, Emma Goldman invited Henri to join the faculty of the Modern School at the Ferrer Center in New York, of which she was a founder. Henri and Goldman became close friends and shared speaking platforms. They both believed that creative individuality in art is attainable by all and consistent with a struggle against authoritarianism everywhere, part of the global impetus toward social transformation.

Henri’s classes and lectures at the Ferrer Center were extremely popular. He became a board member and stayed with the project until it transferred its activities to Stelton, New Jersey in 1918. In addition to teaching, he was active in supporting Goldman and other anarchists in struggles against legal persecution.

The fusion of art and anarchism in Robert Henri’s work appears in his choice of subjects and his method of portraying them. He aimed at uncovering the remarkable in everyday life, including ordinary people overlooked by more conventional artists.

Allan Antliff’s “Decolonizing Modernism: Robert Henri’s Portraits of the Tewa Pueblo Peoples” online in The Art Bulletin, is a very informative article about Henri’s work on painting some of the most overlooked and exploited people of the time, ordinary Indigenous individuals from pueblos near Santa Fe and elsewhere.

Today’s rebels can appreciate Henri’s rejection of the superficial and stress on the essential spirit to be sought and evoked as part of the creative process—one way of re-enchanting the world.

Addressing painters, but certainly meant for all who seek freedom and free expression, Henri suggested, “Reveal the spirit you have about the thing, not the materials you are going to paint. Reality does not exist in material things. Rather paint the flying spirit of the bird than its feathers.”

As we contemplate the inflated image of an aspiring tyrant floating in a clear sky, we focus on the vile character subject to scorn and the laughing spirits below who are freed, however briefly, by the expressive effort of the effigy’s maker.

The spirit of artist and anarchist Robert Henri is there, laughing, too.

Quincy B. Thorn is a longtime friend of the Fifth Estate and its irrepressible spirit.