The Logic of the Telescope

Against the wisdom of Hawaii's Native People 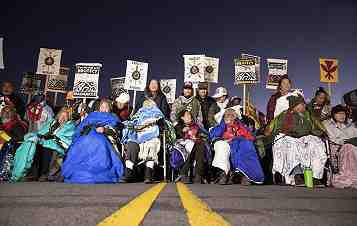 Last July, the so-called United States celebrated the 50th anniversary of the Apollo 11 moon landing while another fascination with space was playing out badly. It was with zero irony that the supposed “giant leap for mankind” was recognized while the Kanaka Maoli people of Hawaii’s struggle to prevent a promised miracle of science from desecrating their land was ignored.

Colonial reality unfortunately continues on Hawaii. However, there is resistance as the newest iteration of progress attempts construction of a Thirty Meter Telescope (TMT), the world’s largest visible-light instrument, on the sacred mountain of Mauna Kea. Blockades by Native resisters, a resurgent and important tactic, are being used against infrastructure projects such as pipelines across the United States and so-called Canada. The physical closing of roads to halt the TMT began in 2014, was reinvigorated this year, and is continuing at the time of this writing for over 90 days. The cops have used sonic weapons and mass arrests to clear the access road to allow construction to begin but the resistance is solid.

The recent campaign against the construction of the TMT utilizing blockades and demonstrations did not begin in 2009 when elite technocrats concluded that the dormant volcano was the ideal site. This struggle stretches back to the 1960s when the first of a series of telescopes was constructed on the mountain by the University of Hawaii. Throughout the 1980s, Native Hawaiians were arrested defending the mountain, which rises 33,000 feet from the sea floor, and some of the same resisters have been arrested again in 2019 during the most recent campaign.

In typical colonial fashion, the needs and experiences of Native Hawaiians were considered but a nuisance, an unfortunate speedbump in the way of an inevitable march of scientific progress.

It seems absurd to have to write this while humanity is in such turmoil—climate change, worldwide political chaos, global power polarization, increased fascist rhetoric, the vanishing of wild areas—that there’s a need to fight a telescope. The absurdity comes not from the nature of the struggle, but from the audacity of our techno-elite and their unshakable pathology of control.

The fascination with the beyond, the eternal frontier of knowledge which constitutes so much of the thrust and momentum of civilization, is at work to crush the barriers and blockades which stand against this continued scientific assault. The narrative of all colonizers is that assimilation or genocide of any population standing in its way is impossible to avoid, a by-product of unstoppable progress or religious destiny. Space provides both legitimacy to the scientific regime as well as literal space for the expansion of capital.

At this point, not many people are buying the myth of progress being sold by the elite investors backing the telescope. It is telling that a major funder of the telescope is Intel Corporation co-founder Gordon Moore who has committed $200 million. The narrative and pathology of civilization is unrelenting in its ability to manipulate reality into a conflagration of progress that defies all obvious hazards.

The logic of the telescope tells us that “out there” exists answers and fascination unlike any we have ever seen. We’ve been to the ends of the earth and must now extend up and out; we’ve populated the Earth’s orbit with trash and tools of control, we must now look further.

The culture of the smug declares that we all hold the compendium of scientific knowledge collectively, even as this stands in direct contradiction to civilization’s model of specialization. We are sold an outright and obvious lie once again. The unknown, for most domesticated humans, is no more than a few feet away. We live in a world where the unknowable beyond our eyesight somehow trumps the commonly unknown biological life underneath our feet and around our bodies.

The push for the Thirty Meter Telescope is grounded in a propaganda campaign that prioritizes the limited perception of space, through the eyes of a machine, no less, over the basic and cogent understanding of lived reality by living beings. Through imagining the experience and the supposed comprehension of the totality of scientific knowledge, we build a fantasy to relieve the brutality of daily life.

Science’s application in the form of infrastructure is a physical manifestation that justifies our obsession with the fantasy. We supplant reality, first by domination, then by imagining and divorcing ourselves from the world, convinced that better and more thorough understandings exist.

If we look at Mauna Kea through a civilized eye, we can see what the politicians, funders, and astronomers are thinking—there’s nothing there. Empty space, a vessel of ground from which knowledge may sprout.

Why should the givers of scientific truth be forbidden from expanding what is their essential right to knowledge? It is the same logic on display in the mountains not far from my home in the Appalachian mountains home where wind turbines now mar the entire line of sight.

The unflinching scientific propaganda put forth by the promoters of the Thirty Meter Telescope makes clear that this is the perfect site. The land, some of the most wild left on the planet, should now finally provide for civilization.

In 2015, in the early stages of the Latest resistance to the Thirty Meter Telescope, The New York Times published a telling editorial stating, “The telescope builders have a strong claim to legitimacy, and they are being blamed for things they had nothing to do with.”

Carrying on with the absurdity they write: “This is an unfair burden for a group that has spent years cultivating local support, navigating the approval process and successfully—so far—fending off lawsuits. It insists its paperwork is in order.”

In a few short sentences, the Times manages to encapsulate the entire struggle—the paperwork is order. We have the right to destroy whatever we want. Science is, after all, the essence of “legitimacy” in modernity and the blockades are anything but legitimate.

What has changed since 2015 that there is now popular support for the current struggle for Mauna Kea? There are many factors to analyze: a vibrant decolonization movement; successive blockade struggles breaking into the media; the absurdity of development at all in the face of catastrophic climate change.

The time has come to reject science as a method of hierarchical understanding.

Steve Kirk is an anarcho-primitivist author, musician and an editor at Oak: A Journal Against Civilization. Oakjournal.org.