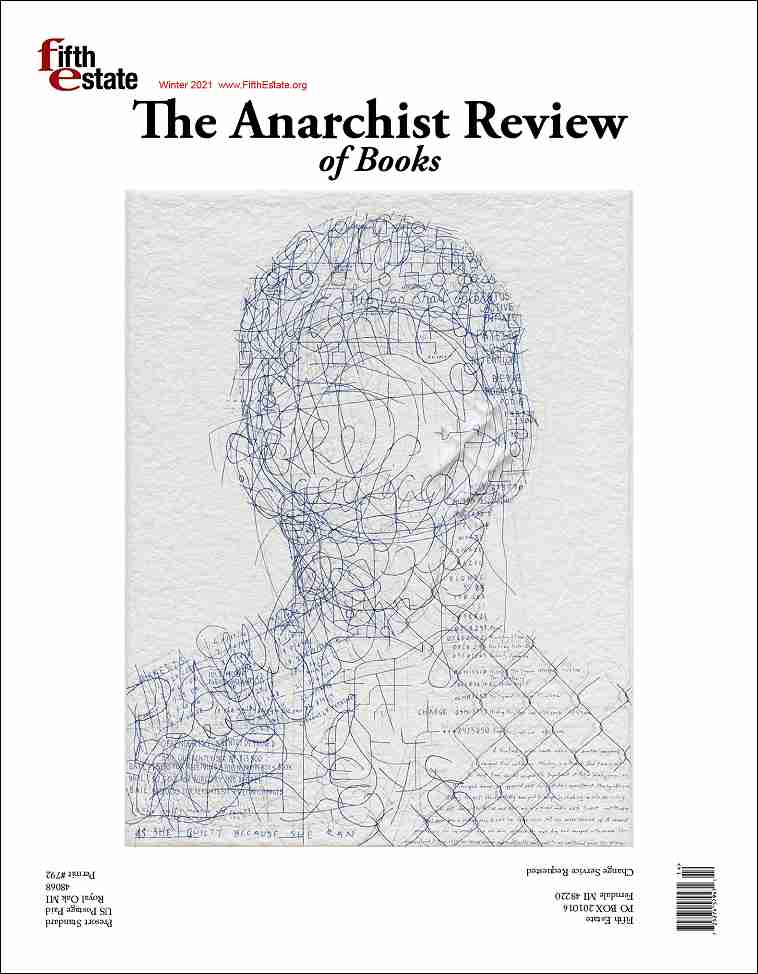 Welcome to Fifth Estate’s Anarchist Review of Books, edited by a collective based in Austin, Detroit, Chicago, New York, Oakland and Seattle. ARB brings you intelligent, subversive, non–dogmatic writing with an anti-authoritarian perspective.

We put this issue out at a time of grave concern in American publishing. A deadening combination of corporate consolidation and academic professionalization of writing has produced decades of embarrassing, dull work and uninspired critique that stands as a record of cowardice and complicity in literature; a one-two punch that has brought wily, vibrant work to its knees.

For more than twenty years success in American publishing has been determined by a handful of literary finishing schools—an aptly named terminal degree, a contract with a house (owned by one of just four corporations) that professes to care about good writing not politics—and an implicit understanding politics never refers to class.

You may think this is nothing new—one generation’s Evelyn Waugh is another’s Brett Easton Ellis is another’s Ottessa Moshfegh. The literary world never seems to tire of elegant jaded monsters lamenting how the fall of empire sullied their pleasures and drove them to excess. A concern with good breeding has always dominated the world of contemporary literature, from the days of rich patron publishers who christened their houses with family names, to the corporate coups of media beginning in the 80s, to the current neoliberal essentialism which seeks to brand content and authors by race, gender and sexuality, in order to keep books and authors in easily marketable categories.

But the early patrician patrons of literature, white and sexist all, were still moved by the power of the imagination, and by writing as an intellectual pursuit. They operated independently. Today’s corporate gatekeepers, racist and sexist as ever, have reduced readers to data points, books to units, editors to corporate acquisition officers, and authors to content providers who are bullied to adapt their work for the benefit of publicly traded conglomerates.

The Anarchist Review of Books publishes work by and about radical voices in fiction, poetry, cultural criticism, and creative non-fiction. We are dedicated to creating a transformation of society—through literature and through open, incisive critique of the media, politics, history, art and writing that shape our world.

In this issue we feature the revolutionary art of Dread Scott, Joyce Kozloff and Ben Durham, interrogate the work of Sylvia Federici, pay tribute to Stuart Christie and David Graeber, and dig into new books by Vanessa Veselka, Jóusè d’Arbaud and McKenzie Wark.

All Power to the Imagination,