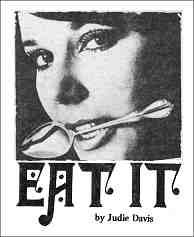 Most of us are familiar with this, the opening line from Henry Miller’s essay, “The Staff of Life.” And it seems a good place to begin a column about food.

We all know how really lousy Wonder Bread is, but chances are that’s what is in your bread box. White bread is cheaper and more convenient to buy. Not all of us live near a bagel factory. Now, what to do with it. If you insist upon putting cheese and bologna between it, what can I tell you?

First, don’t throw stale bread out. It makes the best toast and really out of sight french toast. Try adding a bit of vanilla flavoring and ground cinnamon to the egg and milk mixture. When the bread is stale, the egg doesn’t soak in as quickly and produces a much more eatable french toast. Always use whipped sweet butter when frying anything with eggs in it. It doesn’t cost more and makes everything taste better.

Another use for old bread is to stretch out a meat loaf. For a change from meat loaf, try a salmon loaf. A cheap can of salmon is fifty-nine cent’s, and greatly superior to hamburger of the same price. Add an onion, some green pepper, if you like, an egg, dash of salt and pepper and bread crumbs. Bake it for about an hour at 350 degrees and it is delicious.

But probably the best thing to do with white bread is bread pudding.

Cube the toast and place in a buttered baking dish (about 10 by 6 by 2) and sprinkle with raisins. Separate one egg, reserve the white and beat the yoke with the other two eggs. Scald the milk and add it gradually to the eggs, along with the other ingredients. Keep up the beating process.

Pour the egg-milk mixture over the bread and raisins and bake at 350 degrees for 25 minutes or until custard is set. Beat the egg white stiff, fold in 2 tablespoons sugar and swirl on top of pudding. Bake until meringue is golden. Serve warm.

I found that the almond extract is not really necessary and that regular whole milk is OK. The lemon rind adds a wonderful taste and should definitely be used.

But in the end, if you must throw out your stale bread, in the name of Henry Miller, don’t throw it out to the birds. We’re bad enough off without messing up our birds. Besides, when is the last time you saw a bird?