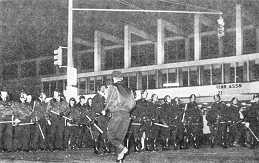 “I really got this one guy who called me a fascist pig. I beat him to a pulp.”
— A Detroit Policeman (Detroit Scope Magazine, November 9, 1968)

The October 29 rally for George Wallace at Cobo Hall in downtown Detroit ended in what can only be called a full scale police riot. Events inside the Arena set the stage for what later occurred after the rally when 350 club-swinging Detroit pigs attacked a group of about 1,000 demonstrators who had assembled to express their opposition to Wallace’s candidacy.

The former Alabama governor was interrupted several times during his speech as fist fights broke out between hecklers and pro-Wallace supporters. As Wallace was concluding his speech a wild chair-throwing melee erupted between the two factions. About 150 persons were involved in the free-swinging brawl which began when Wallace supporters attacked a group of hecklers by spraying them with a substance resembling the chemical mace.

Police arrested five Wallace supporters during the incident but they were later released. No charges were brought against them. The mace-like chemical was apparently obtained from members of the Star Private Police Agency who were hired by the Citizens for Wallace Committee to maintain order during the rally.

The disturbances inside were minor compared to the shit that went down outside Cobo Hall after Wallace had finished speaking.

As the crowd made its way out of the Arena and past the demonstrators in front of the building Detroit Police wearing helmets with face shields and carrying riot clubs moved in to separate the two groups.

As more people filled the area a scuffle occurred between a Wallace supporter and one of the demonstrators. Police moved in to break up the fight and during the ensuing confusion Patrolman Robert Spooner was sprayed in the face with mace by a man wearing a Wallace button. The officer in charge, District Inspector Anthony Bertoni, seemingly for no reason and without issuing a dispersal order gave the command, “Clear the crowd out!”

The police then broke ranks and ran toward the demonstrators, many of whom were unprepared for the sudden rush and were unable to escape the crazed pigs who indiscriminately clubbed anyone within reach beating them to the ground then stomping on them as they moved past.

It was clear that dispersing the crowd in an orderly fashion was not the object of the police. After the initial charge was over the pigs momentarily regrouped then charged again, using their mace and swinging their clubs wildly at anyone in their way. Head Pig Bertoni made no attempt whatsoever to control his men and the blame for the disturbance must be laid chiefly on him. There were even several reports that he personally took part in some of the beatings.

One of the most seriously injured of the demonstrators was Ed D’Angelo who suffered a broken leg, two broken kneecaps and a sprained elbow. D’Angelo was standing on the sidewalk next to the Ponchartrain Hotel when the police came after him.

“I was standing, talking to someone there, and the police just charged,” D’Angelo said. “They lined up about four or five deep and just charged, with their clubs swinging and mace cans going off.” D’Angelo turned and ran but found himself trapped between the pigs and a 15 foot drop to the sidewalk below formed by an elevated terrace next to the hotel.

When the pigs reached him they shoved him off. His leg was broken in the fall. Another pig rushed up to D’Angelo while he was lying on the ground and started to wail on him with his nightstick. When he told the pig he had a broken leg the pig started smashing it with his club.

D’Angelo is still hospitalized at this writing and doctors are unsure as to whether or not he will ever regain full use of one leg. No attempt was made to charge him with any criminal behavior and he is planning to file a damage suit against the police in the near future.

Another demonstrator who tried unsuccessfully to escape the frenzied pigs was 17 year old Gary Nater of Birmingham. Nater was caught and beaten to the ground by five Detroit pigs. He suffered severe head wounds, cuts on the face and a broken arm.

As in Chicago the pigs attacked photographers in an attempt to hide their brutal acts from the public. In one instance, Scope Magazine photographer Ken Hamblin caught a Detroit pig smashing the camera of a free lance photographer. When the guilty pig noticed he was being photographed he turned on Hamblin, grabbed at his camera and pushed him backwards over a bench.

But where the Chicago police were indiscriminate in their attacks on the press, the Detroit cops appeared to be highly selective. At Cobo Hall pigs attacked only free-lance photographers while sparing photographers affiliated with Detroit’s two major dailies, the News and the Free Press.

It is interesting to note in this regard that no pictures of police action against the demonstrators appeared in either of the Detroit papers and mild accounts of the police action appeared as news stories.

There was other evidence of collusion between the pigs and the press. Criss Beer, one of those arrested during the evening, said he was taken by police to a room in Cobo Hall to await transfer to police headquarters. Beer said that while he was in the room he was approached by a reporter from the Free Press who told him that if he would testify that only Star Security Police had beaten him and not Detroit police he would be allowed to go free and charges would be dropped. Keeping guard on the room at the time was Detroit Police Sgt. Bill Shine, brother of Free Press city editor Neal Shine.

James Pita, Sr. of Detroit was arrested along with his 14 year-old son when they tried to enter the Cobo Hall lobby while the rally was in progress. Pita said that they didn’t try to break in; but they merely tried one of the doors which was locked so they gave up. It was then that police, led by Inspector Bertoni, placed them under arrest. Pita told the Fifth Estate that he felt that an FBI agent had “put the finger on him” and that he was arrested for purposes of “political harassment.” Pita has been active in the anti-war movement.

Originally charged with “interfering with a police officer” Pita and his son were handcuffed and taken into Cobo Hall. When the pair refused to answer police questions Bertoni, in the best tradition of the DPD, upped the charges against them to “inciting to riot,” a felony.

The Wayne County Prosecutor apparently thought the inspector’s judgment a bit hasty (there was no evidence) so he blew the riot charge in the toilet and reduced the charges to “attempting to interfere with a public meeting.” Pita was released pending a court appearance November 25. (Editors’ Note: Witnesses to Pita’s arrest willing to testify in court on his behalf should contact the Fifth Estate office.

On the day following the rally a demonstration protesting the actions of the Detroit pigs was called by the Ad Hoc Action group in front of Police headquarters. Sheila Murphy, a staff organizer for the group, said that she was threatened by pigs at the rally who said they would kill her if they had her alone. Miss Murphy has helped raise money to assist in defending citizens who have been beaten by police.

A protest demonstration was also held Nov. 1 at the Woodward-Hancock station.

The police attack on demonstrators at Cobo Hall was totally unprovoked. Charges made in the News and Free Press that the protesters threw rocks and bottles at police can not be substantiated and can only be considered as an attempt to justify the illegal actions of the police.

What occurred at the rally was not police brutality but criminal assault willfully carried out on a mass basis by the police involved.

What would Che do?