Pull Out the Plugs Brothers and Sisters

by Total Assault on Culture (IWWC) 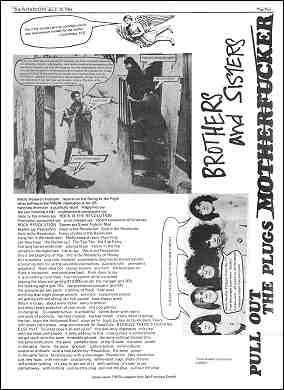 Web archive note: In the print original “Brothers and Sisters” replaces “Motherfuckers,” which is crossed out.

Media Research Institute reports on the Swing to the Right

what politics is for THEM revolution is for US

radio tv the movies say ROCK IS THE REVOLUTION

Long hair is the revolution Media research says: How long

can they keep the illusion up? The Top Ten the Fab Forty

censors in the nightmare rise to say this is not Revolution

peopleshit Rock does not change anyone anymore the beat goes on

Rock is consumed and consumes back Rock dares to say

it is something more than five competent white musicians

the booking agent gets 15% the promotion company gets 10%

the groupies get wet pants listening to Rock hide away

anything that might change anyone anymore except new people

are getting rich and acting like rich people have always acted

Which is to say about every tickle every intention

just about every execution of pop music and pop politics

is unoriginal is unadventurous is unfaithful comes down with reams

ELSE IN IT So what does it all add up to? this desultory digression this carp

in the same forms blinding you with a new slogan: Revolution fake revolution

A winged individual: speech bubble reads: For if the trumpet gives an uncertain sound, who shall prepare himself for the battle? —I Corinthians 14:8

Speech bubble above their heads reads: A GOOD LEADER SLITS HIS OWN THROAT.

Speech bubble below them reads: White Panther Program Point no. 10: Free The People From Their “Leaders”—Leaders suck—all power to all the people—freedom means free everyone!

Man with a burp gun on the left looking up at two people on a staircase: speech bubble over his head reads: Music, like other spiritual gestures life proposes, has been historically abstracted into alienated mimicry, a commodity, only faintly recalling the perception of the marvelous inherent in all men. We recognize that the revolutionary musics of our time can have no place in the bourgeois culture market. We proclaim our musics aloud as TOOLS of liberation but are careful not to confuse them with the TOTALIST LIBERATION itself. Now. We are assassins. Let our musics drip with the blood of our oppressor and his alien culture. The duty of the revolutionary musician is to make the revolution!

The speech bubble next to the higher person on the staircase reads: PSEUDO HIP MERCHANT

Speech bubble next to the lower person on the staircase reads: MEDIA FREAK