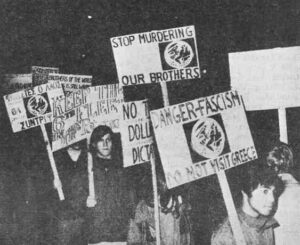 (above) A Greek Independence Day celebration at the Masonic Temple March 22 was the signal for the Michigan Freedom for Greece Committee to hold a protest demonstration. “How can they hold an ‘independence’ day celebration when Greece is in chains ruled by a fascist dictatorship?” asked Nikos Boyias, chairman of the group. About 35 persons participated in the picketing.

(below) Over 400 persons from 22 Detroit area peace, human rights, and radical organizations picketed the Northland offices of the Dow Chemical Company on March 29. The group was expressing its solidarity with the DC-9—nine persons, including six priests and a nun who broke into the Washington offices of Dow on March 22 and poured blood on and damaged furniture and machinery, and showered the streets below with files containing evidence of Dow’s world wide crimes. Included in the DC-9 are two Detroiters, Michael Slaski and Rev. Denis Maloney. Photos: A. Gotkin. 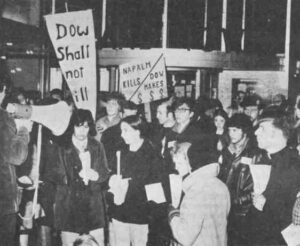