THE BATTLE FOR PEOPLE’S PARK, PHASE ONE

Dan Seigal, president-elect of Cal’s student body, never finished his talk to the thousands gathered to rally behind the Berkeley People’s Park. When he suggested they take the park, avoiding bloodshed and arrest, the crowd immediately left Sproul Plaza. Chanting “We want the park,” and whooping like Indians, they spilled out onto Telegraph Avenue and walked to the Haste Street intersection where a line of helmeted, brown-uniformed police waited behind barricades. 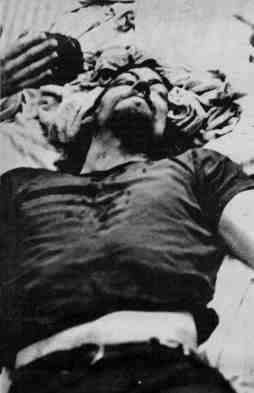 For a few minutes the demonstrators and police eyed each other warily. The chanting continued and a few students taunted police. Suddenly a fire hydrant on the northwest corner was opened sending a graceful arc of water kitty-corner across the intersection. Some street people soon changed the direction of the arc, drenching the police and causing the only laughter heard that day.

Rocks and bottles appeared next, flipping end over end, crashing down on both police and demonstrators. I heard a noise to my right and turned in time to see a charging squad of burly men in powder-blue jump suits. “Blue meanies,” specially chosen for their size, strength, and utter dedication to the rule of club and gun. They raced to the fire hydrant, scattering students who slipped and fell in the wet intersection. Now the first tear gas canisters were thrown, driving most of the demonstrators up Telegraph and into the side streets. Another group retreated toward Dwight Way.

Confrontations with tear gas are short-lived if you don’t have a mask. I held my breath as long as I could and turned up Channing Way. Just ahead of me an Oriental girl and her crew-cutted blond male friend Were gasping and choking—a tear gas canister had exploded at their feet. They were taken into a nearby residence hall.

I continued up Channing Way and literally ran into Sergio Scherr hurrying to the Avenue to take photos for father Max’s Barb.

“Are you all right, man?” he asked. My eyes were bright red and tears streamed down my cheeks but I hadn’t been badly gassed. Sergio then continued on to the Avenue while I looked for some cool tap water. My cheeks were beginning to sting. A blond angel disguised as a secretary unlocked the door to a university office building and three of us headed for a sink. We washed our eyes and faces with soothing cool water taking care not to rub in the clinging gas.

Outside the building the streets were still fairly quiet. Students strolled slowly up and down Channing Way looking through parking lots at the People’s Park on Haste Street. Most of the demonstrators returned to Telegraph but were soon driven up the street to the busy Durant intersection.

No one had bothered to block traffic and scores of frightened drivers were temporarily trapped in their cars. Some of the students argued about blocking off the street. One had the ingenious idea of directing autos the wrong way, down Telegraph and into police lines.

“Let these drivers find out about tear gas,” he said.

But the first car in the right lane was a Cadillac driven by a terrified LOL and she wouldn’t go any direction but forward. Smart move. A huge dump truck roared across the intersection barely missing several demonstrators. Its cursing driver ducked a small volley of wadded paper and fruit.

A few rocks and bottles were hurled from Durant toward the police on Channing Way.

“We ought to be throwing bullets, not bottles,” someone said.

“Cool it, man,” his friend replied.

The police charged to the Durant intersection. Fleeing demonstrators or the police knocked down an elderly white-haired lady in front of Larry Blake’s Restaurant. Several students huddled about her long slender form stretched full length on the sidewalk. I walked across Telegraph intending to help her but was met by an eerie sight, an armed figure peering through his gas mask and waving a club.

“Get out of here,” he shouted through the mask.

“I’m a doctor and I want to help that woman.”

He ran toward me club extended and I split. The old woman was helped to her feet and limped to the lines of the demonstrators. Hanging from her neck was a hand-written sign saying “I love the People’s Park.” I flashed on the last time I had been in the Park—children playing in the swings, David Scherr (another of Max’s sons) working with pick and shovel planting a tree, the distribution of free food.

Dense clouds of tear gas now billowed up from the Telegraph- Dwight area. An unmarked police car was overturned and burned and the police drove the crowds south on Telegraph.

My laboratory assistant was on Ward and Telegraph when she attempted to escape the gas by running into a small building on a lot owned by Cunha Pontiac. One of the Cunha Pontiac employees drove her out shouting “Get out, get out, you deserve everything you’re getting.” I suppose she’ll say the same if their showrooms are destroyed.

Jeeps with police literally riding shotgun weaved up and down Telegraph apparently trying to run down students. Sawed-off shotguns carrying heavy lead slugs (not the birdshot reported by police) and .38 calibre bullets were used to gun down anyone in sight. A 24 year old carpenter on the roof of the Telegraph Repertory Theatre was hit in the face by a shotgun blast. He will be blind for life.

Another shotgun blast ripped through the abdomen of a 25 year old man who is now in critical condition in Herrick Hospital’s intensive care unit. He lost his spleen, a large portion of his intestines and his left kidney. Most of the people wounded by shotguns were released after treatment at Herrick Hospital. Ten were admitted, four in serious condition.

Cal’s Student Health Service admitted ten students with gunshot wounds. Four had been shot with large bore bullets; two had through and through wounds of the extremities; one was hit in the shoulder and one in the abdomen.

One of the Cal students who was shotgunned works in the hospital record room and often brought me patients’ charts. He lost several fingers of his left hand.

Well-informed sources have told me the fencing off of People’s Park occurred when it did solely because the Regents of the University of California were to meet on budgetary matters that afternoon and wished to show the legislature they were in firm control of the situation.

Policemen who reacted like goons and mad dogs were “only following orders.” But their orders came from the administrative goons of the University who value property and budget more than human lives. Even so, Chancellor Heyns and the Regents have made an unwise financial move. The fence around the People’s Park will last only as long as National Guardsmen and police are there to protect it. No Cal student will ever choose to play soccer in the People’s Park—that’s a Cal tradition one can predict in advance.

Militants, now well aware of the University’s high regard for property, may turn now to sabotaging property rather than promoting hopeless confrontations.

The University of California is one of the world’s great educational institutions.

I am proud to be a Cal alumnus. But no piece of property—not Sproul Hall, not the Life Sciences Building, not Dwinelle or Wheeler or any other structure large or small, flammable or not—is worth a man’s hand or eyes.

DEAR DR. HIPPOCRATES is a collection of letters and answers published by Grove Press. $5 at your favorite bookstore.

Web posting note: The photo on this page appeared in the print original without a caption and without attribution.