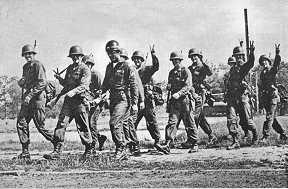 Fifth Estate: What is the American Serviceman’s Union? When was it formed and for what purpose?

Andy Stapp: The ASU is a union organization of rank and file GIs. The ASU has eight demands, which mostly center around the war and racism within the Army. It is essentially a resistance movement which was formed to encourage GIs to fight against the war, which we believe to be an imperialist war.

The union grew out of a series of struggles at Fort Sill, Oklahoma, in the summer of 1967.

We had originally gone into the army with the idea of persuading a few guys to stand up and maybe denounce the war. But I had no idea of the kind of mass support that was there. It soon became obvious that we had the support of thousands of GIs, and that’s when we got the idea of the union.

Fifth Estate: What are some of the union’s reasons for opposing the war? Is the union limited to resistance against the Vietnam war, or does it extend into opposition to the total foreign policy and the struggle for GI rights?

Andy Stapp: It is the position of the union that the war in Vietnam is an imperialist war. The war is part of the global plan of U.S. big business, which since 1898 has been trying to dominate the Pacific base, obtain raw materials and cheap labor and sell U.S. goods.

The consciousness of-the GIs in the union isn’t always so uniform as what I’ve just said. Of course, we feel that it’s an imperialist war, but the union is-not a political party. Right now it’s about 6,000 guys who have banded together to fight against being sent to Vietnam. Naturally, their motives are extremely varied.

Some of the GIs believe that the war is imperialist and support the National Liberation Front. Many others feel that the war doesn’t accomplish anything, as they’d say. It’s a waste and the Vietnamese are getting hurt and that’s very bad and the GIs don’t benefit from it. And then other guys simply don’t want to go there and get their ass shot off.

We don’t require the guys to have an anti-imperialist perspective to join the ASU. We merely require that they be in opposition to the war. Then we try to educate them through The Bond, the union newspaper, about how the war is imperialist.

The Vietnam war is the most important thing the union relates to, but the union also relates to the question of domestic counterinsurgency.

The ASU played a major role with the Fort Hood 43, the 43 Afro-American GIs who refused to go to Chicago where they were going to be assigned in the role of pigs to suppress people in Chicago during the Democratic Convention. We pushed very hard on the case of the Fort Hood 43, even though they weren’t all union members.

They requested our support and we gave it to them to the extent that some of the white GIs in the union who were a little bit racist quit the union because they were upset that we took such a strong stand. We educated a lot of the guys about racism and a lot of black GIs were tremendously inspired.

I think what the Fort Hood 43 did was the most important single act of a group of soldiers since the Vietnam war began. We feel that the question of racism is of equal importance as the question of the war. It can be raised directly in relation to the war, which is racist. Black GIs get all the shit over there. And of course the Vietnamese are suffering racist brutality on the part of the U.S. army. *

In Vietnam itself we fight around other issues besides just the war. For instance, stockade oppression. Our guys were involved in the rebellions in the Danang and Long Binh stockades, last fall. In the Danang stockade there were three nights of rioting. ASU members had objected to calling officers “sir.”

This was followed by a very severe riot in Long Binh. The black and white prisoners faked a fight and when a guard tried to break it up they overpowered him, got the keys and broke out. Some of the black GIs held out for a month in the stockade.

The ASU was very active in both those rebellions.

Also, the ASU was active in the Fourth Infantry Division where the guys were refusing to salute. General Stone was sending these guys to the front for refusing to salute, which meant that he thought they should die if they didn’t show him proper respect. By bringing pressure, we were able to get the order rescinded.

We fight pretty much on any issue we can pick a fight on, not just the war.

Fifth Estate: You mentioned some of the revolts that were taking place in Vietnam by the servicemen. Of course, the media doesn’t report these at all fully here in the States so that it’s impossible to have any idea of what’s actually going on in the army. Could you run down the kind of rebellious actions that GIs have taken, not only in Vietnam, but here in the U.S.?

Andy Stapp: It’s true that the media hasn’t reported this. It’s mostly their fault, although in the case of the Danang rebellion, the colonel imposed press censorship on the entire area.

There have been big rebellions that have been hushed up, not just in Vietnam. There was one in Long An province north of Saigon. Close to 3,000 GIs demonstrated demanding to be brought home after Christmas, members of the 25th Infantry Division.

In the States there have been some of the most violent battles. At Fort Hood, Texas, the 198th Light Infantry Brigade was being sent to Vietnam. The night before they were to be sent they rebelled. They broke into the arms room, got weapons, attacked the officers’ club, threw hand grenades into it, and they beat an MP lieutenant to death.

Busloads of MPs were sent in to suppress the rebellion, and the guys turned over the buses and burned them. They cut the main power supply to all of Fort Hood, and before the night was over they had done $150,000 worth of damage to Fort Hood. Now the unit’s in Vietnam.

There were rebellions in Fort Campbell, Ky.

At Fort Lewis, Washington, an entire batallion refused to ship to Vietnam and when the commanding general started to address them they booed him down. There are innumerable instances of this—it happened at Okinawa, it’s happened in Germany.

Fifth Estate: Could you talk a little bit more in detail about how the ASU goes about organizing servicemen?

Andy Stapp: Right now the ASU has approximately 6,000 members. We have about five fulltime organizers in New York. Naturally, we don’t do all the heavy organizing. We leave that up to the initiative of the local ASU members to form their own ASU chapters on Air Force bases, ships, army bases, etc.

What we do is we supply lawyers, we supply some political advice, we supply a great deal of literature, because they know the best.

Our approach has been one of maximum resistance to U.S. imperialism and maximum opposition to the racist war in Vietnam, which means that we support guys who refuse to go into the ghetto to slaughter the oppressed black people in the ghetto.

Fifth Estate: What kind of support do you think the movement could provide and should provide for the kinds of activities which are going on inside the military?

Andy Stapp: An awful lot of young people now, especially from the campuses, are being drafted into the army. To get the union newspaper to these people before they go into the army and to acquaint them with the possibilities of fighting once they’re in is something that can be done. There’s no reason why we should have to wait for people to be in the army before we reach them.

People could distribute The Bond to GIs at airports. They could also distribute it at induction centers where guys are being hauled into the army.

One of the ways the ASU supports itself is through speaking engagements. We get invited out to a campus for a speech, get a fee and transportation, and then hit the local army bases while we’re out there. So we’re very anxious to have invitations to speak.

We feel that one of the ways that students can relate to GIs is through attacking ROTC on the campus, because the ASU besides being an anti-racist and anti-war organization, is also an anti-officer organization. The officers are the backbone of the war.

The 410,000-man officer corps is a clique which supports the war, supports racism, and supports imperialism. One way students can show their solidarity with GIs is to kick ROTC off campus by any means necessary. The more militant the struggle against ROTC the more GIs are impressed by it.