'Obedience to Law is Freedom'

Editors’ Note: The following article was written last April by LNS staffer Sheila Ryan. The deplorable conditions she describes led to a massive stockade revolt at the base in June which was put down with severe brutality. Many of the prisoners involved face serious charges of rioting and destruction of Army property and several have already been convicted.

FORT DIX, N.J. (LNS)— ‘Obedience to Law is Freedom’ reads the sign over the entrance to the Fort Dix Stockade.

“Colonel, who was responsible for the selection of that slogan?”

“Who was responsible? Well, I don’t know, really. It’s been here for years and years and we really like it.” 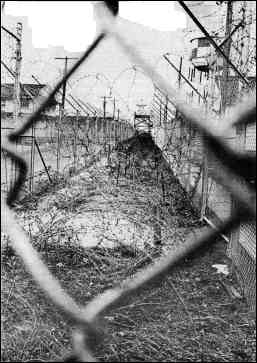 The Fort Dix Stockade is the largest military prison in the country, with the exception of the U.S. Disciplinary Barracks at Ft. Leavenworth. During 1968, according to Army figures, an average of 705 men were confined behind the double cyclone fence and concertina barbed wire. The guards in the stockade are unarmed; those in the guard towers have shotguns.

The most common reason for men being put in the stockade is that they went AWOL. About one quarter of the men AWOL are from Fort Dix itself; the others are men taken into custody in New Jersey, New York, or Fairfield County, Connecticut.

There has been a flurry of interest in the press and concern in Congress about conditions in Army stockades, following the murder of a mentally-ill prisoner in the Presidio Stockade, and the “mutiny” courts-martial of the Presidio 27—prisoners who protested the man’s shooting by a guard.

Because of this adverse public reaction, the Pentagon has ordered that several stockades be opened to tours by newsmen.

On Wednesday, April 16, 50 or so newsmen climbed into Army buses for a trip to the Fort Dix Stockade. Except for two reporters and a photographer from LIBERATION News Service, the journalists represented establishment papers and radio and TV stations.

“You can see anything you want to see.” (Col. William O. Gall, Chief of Staff at Fort Dix)

“No photographs of prisoners. No contact or conversation between newsmen and prisoners.” (Guidelines for the Visit to Stockade by Media)

“How can we really get an idea of what life is like in the stockade if we aren’t allowed to speak to the prisoners?” (A reporter from a New York daily)

“Well, now, if my son or yours were in the stockade for a few months, we wouldn’t want him to suffer for it for the rest of his life.” (Major Casey, Correctional Officer)

“But Major Casey, some men aren’t ashamed of being in the stockade. They consider it perfectly honorable to be in the stockade as a result of their political convictions. May we speak to these men with their permission?” (An LNS reporter)

“I’m sorry, we’re under orders from the Department of the Army. You will not be permitted on the tour if you do not agree to not speak to or photograph the prisoners.”

The newsmen were cynical about the tour, and the Army’s refusal to let them speak to prisoners didn’t alter their view.

Nor did the steak dinner the men were being served in the mess hall. It was clearly not a typical stockade meal.

“I wish you guys would come more often. We’d get more steak…We hate the food. People spit on it.” (comments from prisoners in the mess.)

The mess is large enough to accommodate all the men in the stockade but because of “security reasons” the men eat in shifts.

It’s easy to understand why the Army is concerned about “security” in the mess hall and throughout the stockade. Defiance is in the air. As the newsmen walked past the barracks, prisoners leaned out the window and shouted:

“Tell the truth about this place.”

“There’s no hot water, not enough to eat.”

“See what they do to their Vietnam veterans.”

“Why won’t they let you rap with the prisoners?”

A sergeant snapped at the prisoners, “You, you’re on report to me! Get down there!”

The men showed defiance of that sergeant and of the brass who were herding the newsmen through at a slow run; prisoners flashed V-signs through the windows and raised clenched fists. When LNS reporters responded, the fists And V-signs multiplied.

As soldiers—in this army, anyway—the prisoners are unimpressive. But as people, they command admiration: men drilling in the stockade yard crouched in formation, and, with smiles and clenched fists, greeted the reporters.

Cell Block 60 was the high point of curiosity in the minds of the reporters. Fourteen men are being held there as alleged deserters—including Terry Klug, an organizer for RITA (Resistance Inside the Army), and Donald Williams, who was sentenced to six months in the stockade after his voluntary return from Sweden.

Cell Block 60 first gained notoriety after the publication of a letter written by Don Williams. He told how he was beaten by a guard, Spec. 5 Young, because “I had been getting on his nerves.”

And in the beginning of January, a letter from 14 men who were fasting in Cell Block 60 said:

“Many people may have read last week about the special cell block Fort Dix Stockade has Cell Block 60 is the name of the big brasses’ biggest headache in stockade history.”

When the reporters arrived, there were no prisoners in Cell Block 60—they were all “out to lunch.” The barracks was dismal and barren. Part of each man’s life in the stockade was laid out in his open footlocker—correspondence with relatives, photos of girlfriends, a letter with the bold letterhead of the National Emergency Civil Liberties Committee.

Far grimmer than Cell Block 60, though are the “segregation” cells. Thirty men are being held in 6’x8′ cells. Six of them are in “disciplinary segregation,” (“for fighting, mostly” an army official said).

The rest in “administrative segregation” because they are considered “escape risks,” “homosexual,” “narcotics addicts” or “sensitive.”

Deserters, for instance, may be “sensitive” because some physical harm might come to them from other prisoners, who, Major Casey claimed, resent the anti-war stance of the deserters. But the atmosphere in the stockade while newsmen were touring made it apparent that a man would have far more to fear from his fellow prisoners for expressing pro-Army, pro-war opinions than the contrary.

The men in “segregation” were ordered to stand at attention while the newsmen peered at them. Defiance here was subtler than in the barracks—a smile, a wink, an unobtrusive clenched fist held by the side.

Reports from prisoners indicate that conditions in “segregation” are subhuman. One man recently smuggled a letter out of the stockade.

“Five weeks ago a black man, first name Edward, was in the cell in straps, He was lying on his stomach with his arms and legs tied painfully behind his back. He must have been in unbearable pain because he had been crying for half an hour. The guards were standing in front of his cell calling him ‘dog’ and ‘black monkey.’ They were laughing and asking the man if he still thought himself to be tough. Ed’s codes were four (“mentally unstable”) five (“unresponsive to discipline”) and eleven (“very dangerous person”)’.

An Army officer said, “We only put men in restraints if they are suicide risks.”

Men in disciplinary segregation may be put on a “restricted diet” for 14 days at a time as punishment.

“It is the same meals served to other prisoners,” Major Casey said, “with the exception that there is no meat, no fruits, no deserts, no milk, no poultry, no dairy products. The only drink permitted is water.”

The press tour passed through the gate with the “OBEDIENCE TO THE LAW IS FREEDOM” sign, and climbed back into the two army buses. Back at “Doughboy Hall,” a press conference had been scheduled.

“Would you say the library is used frequently?” (Frank Mazzo, the Daily News)

“I checked through all the library cards for all the books. Only four were signed out. The cards were all brand new.”

There were no copies of Shakedown, (Fort Dix underground paper) in the library when the reporters got there, but before the LNS people left, several copies found their way into the shelves.

The mail is a particularly sensitive matter. “Earlier you said that privileged mail is never censored.” (Mail regulation: Mail of a privileged nature such as correspondence to and from the President, Vice President, Members of Congress, Attorney General, the Judge Advocate General or their representatives, Defense Counsels or other Attorneys of Record, Inspectors General, Chaplains and/or Clergymen is not inspected. Because of the privileged mail rule, it is absolutely unnecessary for any prisoners to have to smuggle letters and information out of the stockade.) “But I have a letter here, smuggled out to his attorney by a man in the stockade. He writes, “The N.C.O.I.C. Sgt. Becker refuses to give me my mail and opens all my confidential mail. He has stated that ‘he does not care who the mail is from.'” (an LNS reporter)

“But a man who works in the mail told me that in cases of suspicion, letters may be opened.”

“You’re telling us that you look at the signature but you don’t glance at the contents?”

No one really believed that.

There are some hopeful aspects here, however. Last year, 16 men escaped directly from the stockade, and others from parole or work details—361 escapees in all.