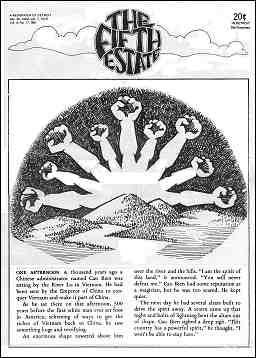 One afternoon a thousand years ago a Chinese administrator named Cao Bien was sitting by the River Lo in Vietnam. He had been sent by the Emperor of China to conquer Vietnam and make it part of China.

As he sat there on that afternoon, 500 years before the first white man ever set foot in America, scheming of ways to get the riches of Vietnam back to China, he saw something huge and terrifying.

An enormous shape towered above him over the river and the hills. “I am the spirit of this land,” it announced. “You will never defeat me.” Cao Bien had some reputation as a magician, but he was too scared. He kept quiet.

The next day he had several altars built to drive the spirit away. A storm came up that night and bolts of lightning bent the altars out of shape. Cao Bien sighed a deep sigh. “This country has a powerful spirit,” he thought. “I won’t be able to stay here.”