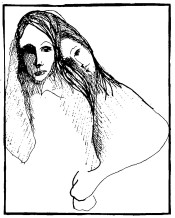 I’ve just discovered why it’s been so hard to write this article. I was really hung up on the word “Lesbian.” I had never applied this label to myself. With this label came associations of sick, abnormal, neurotic and dyke. But if my actions and attitudes are labeled lesbian, then I know that those associations are wrong and only reflect the sick attitudes of this society.

My relating primarily to women was a natural course of events. After several fucked-up relationships with men, I discovered that the women in the commune were much better for my head and emotions. They weren’t interested in pumping me with the correct political line or ignoring me because my appearance is large and unfeminine. With them I explored my ideas and experiences. I developed confidence and started feeling good about myself.

I got especially close to one sister. We, feeling lonely and out of genuine like for each other, slept together. Our relationship gave me new freedom. Freedom from the oppressive emphasis on penetration and orgasm to enjoy the pleasure of a sensual experience. Finally I am beginning to enjoy and not be ashamed of my body. A new consciousness of being a sensual person, instead of a sexual person, is developing.

Lesbianism has not been a sexual perversion. It has had nothing to do with “sex.” It hasn’t been another way to “do it.” But instead, a whole other way to have contact.

We have gotten a lot of pressure about being dykes, primarily from men in our commune. Men who are insensitive to their own feelings and are not used to the idea of love not based on sex roles. At times they have succeeded in bringing me down. I’ve almost believed their insecure lies and ceased to trust my own feelings. But fuck that shit! I know Lesbianism is not a sickness. Lesbianism is a healthy growth of sister love. DYKE POWER!