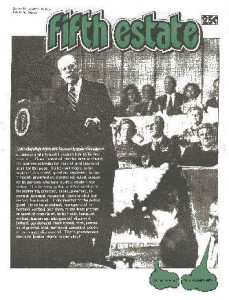 President Ford: “Whoever lays a hand on me to govern me is a usurper and a tyrant; I declare him to be my enemy…Government of man by man is slavery. Its laws are cobwebs for the rich and chains of steel for the poor. To be governed is to be watched, inspected, spied on, regulated, indoctrinated, preached at, controlled, ruled, censored by persons who have neither wisdom nor virtue. It is in every action and transaction to be registered, stamped, taxed, patented, licensed, assessed, measured, reprimanded, corrected, frustrated. Under pretext of the public good it is to be exploited, monopolized, embezzled, robbed, and then, at the least protest or word of complaint, to be fined, harassed, vilified, beaten up, bludgeoned, disarmed, judged, condemned, imprisoned, shot, garroted, deported, sold, betrayed, swindled, deceived, outraged, dishonored. That’s government, that’s its justice, that’s its morality!”