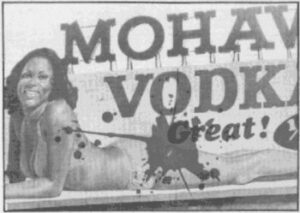 Mohawk and the other booze peddlers hit by anti-sexist vandals moved quickly to restore their insults to women. Further action against them has been promised.

Billboards are so plentiful in and around Detroit that they could almost be taken for granted as part of the natural environment. Indeed, in a society where profit outweighs everything else, billboards fit-in quite naturally. They are the “Au-natural” voice of capital, and their mimicry of the population’s repressed desires flaunts the consumer only with the ideal of escape via sex, liquor and flights far away.

Recently, a small group of people “declared war” on Detroit’s billboards. Armed and able, they first struck on the night of September 21 splashing beautiful red paint on several billboards throughout the area. Some of their targets included Black Velvet billboards at E. Six Mile & Jos. Campau and Mt. Elliot & I-94; a Mohawk billboard at E. Outer Drive & I-94; and others including Ronrico Rum.

Lest their actions be regarded as mere, unpremeditated vandalism, the group sent a statement to various representatives of the local media. The group also contacted the Fifth Estate which resulted in an exclusive interview with a few members.

One of the billboard bombers, named Red, explained why only Ronrico, Black Velvet and Mohawk were “beautified.” “We concentrated our efforts on sexist billboards,” said Red. “All billboards deface the environment, but the worst are those which use women’s bodies to sell their lousy products. Since our group is much too small to deal with all billboards, we decided to get some of the more offensive ones.

Turpentine, another member of the group, commented: “Mohawk, Black Velvet and Ronrico are all guilty of exploiting women to sell their booze. Their ads portray women as sexual objects which reinforces the real day-to-day oppression of women.”

Red added: “Men, as the primary targets of these liquor companies are also victims of sexist ads. The billboards imply that men who drink the particular brand of liquor will obtain sexual gratification. This not only insults men’s intelligence but it makes it more difficult for them to relate to women as people.”

The Fifth Estate talked with Mike Mullin, manager of Heublein Distillers Inc., local manufacturers of Black Velvet, to let them respond to the charges.

“I’m surprised that anyone would destroy private property to get their point across,” declared Mullin. “I really see nothing sexist in the Black Velvet ad.”

A spokesperson for Black Velvet’s national office in Hartford, Connecticut, a Mr. Pierce, had some more to say. “We’ve had a flurry of letters over the years objecting to our Black Velvet ads,” he said. “Of course, we don’t agree, but we’re concerned. Actually, this particular ad campaign is very successful. We’ve been complimented, from both men and women, on our Black Velvet girls…you know, they are very attractive.”

Pierce said that Heublein, Inc. is definitely going to continue using the same ads on their billboards.

“We can’t be influenced by a few isolated incidents of vandalism,” he explained.

The billboard bombers said they were hopeful that other people would follow their example and begin “beautifying” billboards in Detroit.

“People could easily do the billboards in their neighborhoods,” suggested Red. “All that is needed is a little paint, some eggs and a few hours time.”

Eggs?!? “We made our paint-bombs out of eggs,” explained Turpentine. “Eggs are very easy to throw–especially at the billboards that are really high off the ground. We punched little holes in our eggs to empty them and after filling them with paint, we covered the holes with tape. Needless to say, we had a huge omelet for breakfast the next morning.”

“Egg-bombs aren’t really needed for billboards that are close to the ground. These can be beautified with spray paint or by simply splashing a can of paint on them,” added Red. “In any case, the paint should be watered down with thinner–it will spread much better.”

The billboard bombers all agreed that splashing paint on billboards is, in itself, not enough.

“People will dismiss the action as vandalism unless the local media is notified of its happening,” said Turpentine. “A press release should be distributed–it doesn’t necessarily have to be signed.”

The billboard bombers are already planning their next mission.

“Our next target will be the Army, Navy and Marine recruiting billboards in the area,” said Red. “There are a lot of ’em around town now because this is the time of year that their recruitment campaign is at its peak.”

Vandalism, or the malicious destruction of private property, does not at all describe the activities of the billboard bombers. We would much rather call such activity “community involvement in a mutual discourse couched in the language of capital.” They talk to us, we respond. Talk it out, we say, It’s the only language they understand.