The Guardian vs. Language 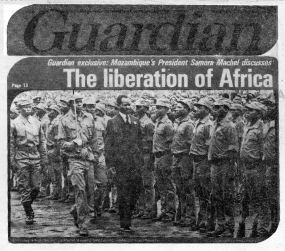 While the main contribution of Marxism-Leninism remains its establishment of state capitalism in areas of the world where private capital could not develop, its project has also debased language to a point suggested in George Orwell’s 1984—where words are distorted so as to take on their opposite meaning. A case in point is the Aug. 11, 1976 front-page of The Guardian, a New York City based Mao-oid weekly newspaper, which announced proudly “The Liberation of Africa.” No matter that what is pictured is a civilian politician (President Samora Machel of Mozambique, who rules without even the pretense of an election) reviewing the troops—faceless cannon fodder, dressed identically, responding automatically to commands, ready to die for the State and the Leader.

This is a photo that could have been taken in any nation in the world, yet it is peddled to the Guardian’s hapless readers as “liberation.” Either the word has totally lost its meaning or there are large numbers of “leftists” who view a liberated existence being simply a new crop of rulers and order-givers. It is clear what fascination the alteration in definition holds for leftist aspirants to power—they most certainly see themselves as the business-suited politician doing the reviewing and not as those standing at attention.