Fredy Perlman was born in Brno, Czechoslovakia on August 20, 1934. He emigrated with his parents to Cochabamba, Bolivia in 1938 just ahead of the Nazi takeover. The Perlman family came to the United States in 1945 and lived variously in Mobile, Alabama, Brooklyn, Queens before settling in Lakeside Park, Kentucky, a suburb of Cincinnati, Ohio where Fredy graduated high school. 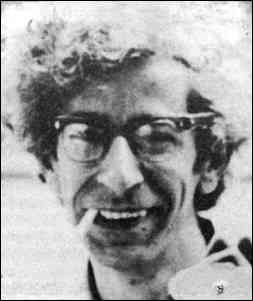 In 1952 he attended Morehead State College in Kentucky and then UCLA from 1953-55. Fredy Was on the ‘staff’ of The Daily Bruin, the school newspaper, when the reactionary university administration fired all of the editors of the publication. The five editors, including Fredy, proceeded to publish an independent paper which they distributed on the campus.

In 1956-59 he attended Columbia University where he met his life-long companion, Lorraine Nybakken. He originally enrolled as a student of English literature, but soon concentrated his efforts in philosophy, political science and European literature. One particularly influential teacher for him at this time was C. Wright Mills.

In late 1959, he and Lorraine took a cross-country motor scooter trip mostly on two-lane highways traveling at 25 mph.

From 1959-63, he and Lorraine lived on the Lower East Side of Manhattan, while Fredy worked on a statistical analysis of the World’s resources with John Ricklefs. They participated in anti-bomb and pacifist activities with the Living Theatre and others. Fredy was arrested following a sit-down in Times Square in the fall of 1961. He became the printer for The Living Theatre and during that time wrote The New Freedom, Corporate Capitalism and a play, “Plunder,” which he published himself.

In January 1963, Fredy and Lorraine sailed for Europe on a Swedish freighter for what they considered a definitive departure. In September of that year they arrived in Belgrade, Yugoslavia after living some months in Copenhagen and Paris. In June, he had inquired about becoming a student in Czechoslovakia, but the country of his birth found his request to be suspect.

From 1963-66 Fredy studied at the Belgrade University Economics Faculty where he received a Master’s degree. His thesis was titled “The Structure of Backwardness.” He received his Ph.D. at the Law Faculty; his dissertation was titled “Conditions for the Development of a Backward Region,” which created an outrage among some members of the faculty. During his last year in Yugoslavia, he was a member of the Planning Institute for Kosovo and Metohija.

During 1966-69, Fredy and Lorraine lived in Kalamazoo, Michigan where Fredy was a professor in the Economics Department at Western Michigan University. Most of his teaching was in introductory social science courses and again he created outrage among some members of the faculty when he initiated student-run classes and let the students grade themselves. During his first year in Kalamazoo, he and Milos Samardzija, one of his professors from Belgrade, translated I.I. Rubin’s Essays on Marx’s Theory of Value. Fredy wrote an introduction to the book: “An Essay on Commodity Fetishism.”

In May 1968, after lecturing for two weeks in Turin, Italy, Fredy went to Paris on the last train before rail traffic was shut down by strikes. He participated in the exhilarating May days in Paris, and worked at the Censier center with the Citroen factory committee. After returning to Kalamazoo in August, he collaborated with Roger Gregoire in writing Worker-Student Action Committees, May ’68.

During his last year in Kalamazoo, Fredy had left the university and together with several other people, mostly students, inaugurated Black & Red, of which six issues appeared. Typing and layout was done at Fredy and Lorraine’s house and the printing at the Radical Education Project in Ann Arbor. In January 1969, he completed The Reproduction of Daily Life. While traveling in Europe in the Spring, he spent several weeks in Yugoslavia and there wrote Revolt in Socialist Yugoslavia, which was suppressed by the authorities as a CIA plot.

In August 1969, he and Lorraine moved to Detroit where he wrote The Incoherence of the Intellectual and, with others, translated Debord’s Society of the Spectacle.

In 1970, Fredy was one of a large group who set up the Detroit Printing Co-op with equipment from Chicago which they moved, set up and learned to operate. For the next decade, Black & Red publications were printed there along with countless other projects ranging from leaflets to newspapers to books

Between 1971-76, he worked on, often with others, several books, some original, others translations, including: Manual for Revolutionary Leaders, Letters of Insurgents, Arshinov’s History of the Makhnovist Movement, Voline’s The Unknown Revolution, and Camatte’s The Wandering of Humanity. During the same years, Fredy began playing the cello, often playing in chamber music sessions twice a week. In 1971, he and Lorraine traveled to Alaska by car.

In 1976, Fredy underwent heart surgery to replace a damaged heart valve. Afterward, he helped write and perform “Who’s Zerelli?” a play critiquing the authoritarian aspects of the medical establishment.

During 1977-80, he studied (and charted) world history. During these years, he traveled to Turkey, Egypt, Europe and regions of the U.S. to visit historic sites with Lorraine. In 1980, he began a comprehensive history of “The Strait” (Detroit and surroundings). He did not finish this work as the first and last chapters remain unwritten. In July 1985, he estimated that it would take him eight or ten months to complete and edit the manuscript.

Both Fredy and Lorraine helped on the Fifth Estate doing typesetting and proofreading as well as contributing articles. Fredy’s most recent contributions were “Anti-Semitism and the Beirut Pogrom,” [FE #310, Fall 1982] and “The Continuing Appeal of Nationalism” [FE #319, Winter, 1985]. During 1982-3, Fredy suspended work on “The Strait” to write Against His-story, Against Leviathan.

In 1983, Fredy joined the cello section of the Dearborn Orchestra and in June 1985 performed quartets by Mozart and Schumann at a program for Physicians for Social Responsibility.

On July 26, 1985, Fredy underwent heart surgery at Henry Ford Hospital to replace two valves. His damaged heart was not able to resume its functioning at the end of the operation.