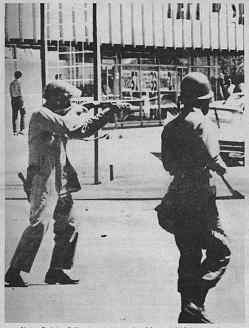 The battle for People’s Park began 22 years ago. The following is an excerpt from our lead article in FE #80, May 29, 1969, which was entitled, “Police Riot: Murder In Berkeley.” The cover price was 15 cents.

BERKELEY (LNS)—One man was murdered and over 200 people injured by police May 15 in the heaviest street battle in Berkeley yet over who controlled a city park.

For the first time, cops used shotguns and rifles against the people. Over a hundred people were hit with birdshot, rock salt, lead pellets and with carbine bullets.

James Rector, the murdered man, was hit by a cop’s 12-gauge shotgun in the stomach at close range while watching the street action from a rooftop. He was 25.

The people fought back viciously, throwing rocks, bricks, bottles and anything else they could get their hands on, but as yet, no police have been shot. Over 70 cops have been injured.

To date 869 persons have been arrested and the people have called for a national support march on Berkeley to reclaim the park.

The four hour street battle was fought over a small, vacant piece of land owned by the University of California. The people decided to beautify it and make it into a “People’s Park.”

As cops began their murderous onslaught, people fought back.

See “People’s Park: The battle for land” by Jack Straw in this issue.