Down with authoritarianism of all kinds: 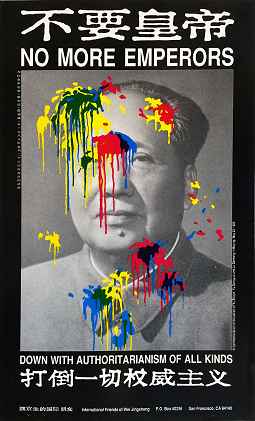 WHO ARE THEY: Yu Zhijian, age 27, formerly a teacher at the Tantou Wan Primary School in Dahu Township, Liuyang County, Hunan Province. Yu Dongyue, former fine-arts director of the Liuyang News. Lu Decheng, 28, previously an employee of the Liuyang branch of the Hunan Provincial Bus Company.

WHY ARE THEY IN PRISON: On May 23, 1989, they attacked the giant picture of Mao Zedong in Tienanmen Square, Beijing, with ink and paint-filled eggshells, summing-up in a single bold stroke China’s experience with Marxism-Leninism. The three were immediately seized and were tried by the Beijing Intermediate Court in September 1989 on charges of “counterrevolutionary sabotage” and “counterrevolutionary propaganda and incitement”. They were sentenced to life, twenty and sixteen years imprisonment respectively.

WHAT IS THEIR SITUATION: After their sentencing they were assigned to a “strict regime” unit in Provincial No. 3d Prison, Lingling Prefecture, Yongshou City, Hunan. Lu Decheng was remanded to a shared-cell regime after six months. but Yu Zhijian and Yu Dongyue have been in solitary confinement since 1989.

Accused of having uttered “reactionary statements” against certain government officials, they have been subjected to a wide range of physical torture and are now in grave condition. Teacher Yu Zhijian was most recently reported as being severely emaciated and fine-arts editor Yu Dongyue has been rendered incapable of controlling his physical functions. It is clear that the government of the People’s Republic of China means to murder them in prison.