20 Years of the Fifth Estate 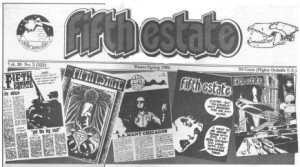 On the occasion of a past anniversary, we noted that the Fifth Estate had been described by the FBI in its files as “supporting the causes of revolution everywhere.” It has been a pleasure and an honor, a calling and a commitment over the past twenty years for the hundreds of people who have comprised the newspaper staff and the hundreds of thousands of readers to make that description accurate. In an age dominated by a mass media whose message is that no resistance exists to the empire and its culture, we are proud to be one of the many centers that boldly announces that this is not true.

Although there have been many changes in the way the different staffs have viewed the world, our enemy and our vision have remained constant: a call for an end to capitalism and the political state, and to erect in its place a decentralized, cooperative human community. These are goals which may at times appear unrealizable within the modern world, but they are ones that tie our lives together and make us state firmly: even if we can never achieve them, we will never end our resistance and our dreams. For Anarchy!