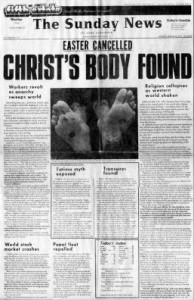 After the Eat The Rich Gang (ETR) distributed several thousand copies of their phony front page, which were stuffed in Detroit News coin boxes, angry christians called the offices of the Fifth Estate demanding, “my children came home crying because of your sick joke. What are you going to do about it?!”

It was reported that after watching Luis Bunuel’s Le Fantome de la Liberte at a local movie theatre, some ETR gang members, armed with gallons of Pet Milk and a bottle of bourbon, pasted the broadside on dozens of church doors to greet the faithful on Easter morning.