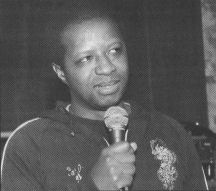 er face the uncertainty of opposing the war and going AWOL than face the certainty of being shipped and fighting in a war that I am against.

“I’m going to continue to speak up because I want to encourage other people to not go quietly.”
— Carl Webb

The Pentagon says more than 5,500 soldiers have deserted since the war started in Iraq. From Iraq Veterans Against the War to Military Families Speak Out, a new anti-war movement finds its center in the disaffected and disillusioned ranks refusing to go. We offer solidarity to each one.

The Fifth Estate has always opposed conscription and supported GI resisters. Since Vietnam, we have encouraged dissent within the ranks of the armed forces as a legitimate method for unraveling the empire’s ability to make war. After endorsing this position for four decades, we were honored to have a soldier refusing to fight in Iraq come to a recent Fifth Estate benefit in Nashville to speak out against the war.

Carl Webb is a member of the Texas National Guard, protesting the illegal orders of the Stop Loss Program requiring him to serve in Iraq beyond the length of his contract that ended in August 2004. Under the program, tens of thousands of soldiers have been prevented from retiring or leaving the military upon completing their enlistment terms, so that they may be deployed to Iraq.

Webb refused to report for training with his unit at Fort Hood and left Texas. In January 2005, Webb’s unit deployed for Iraq while he remained AWOL. He continues to speak out against the war, and while military authorities have contacted him, no action has yet been taken. While he has appeared on the radio and has become increasingly public about his resistance, several newspapers in Knoxville where he is living have refused to interview him or publish stories about anti-war GIs.

The FE Collective thanks Carl Webb for his support at the recent benefit in Nashville, and we offer our support in his refusal to fight and solidarity in his struggle to expose the more serious offenses of the US military in Iraq and the world.