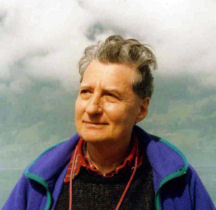 Experimental poet and composer Jackson Mac Low died in New York on December 8th. Known for his participation in the sixties performance group Fluxus, his association with John Cage, and his experiments in the so-called “chance composition” of poetry, Mac Low was also a lifelong anti-authoritarian activist.

His method of composition and scoring of his work owe much to music; through his interest in anarchism and Buddhist metaphysics, Mac Low’s writing challenges the primacy of the poet’s ego as the determining factor in the writing of poetry.

Experiments in composition, while beginning in the 40s, were clarified in the mid-fifties with the use of “chance” procedures. In 1955 he followed composer Earle Brown’s use of the Rand Corporation’s table of random digits as one of many so-called “chance” methods of composition. Throughout the 50s and 60s he pioneered the use of various formal procedures for writing poetry, procedures often grouped together as “chance” or “aleatoric,” but actually consisting of a variety of methodologies, from the diastic-acrostics of early 60s work included in Stanzas for Iris Lezak and Assymmetries (1-260) to the associative poems of the last few decades. After 1954, a biographical note explains, “‘non-intentional’ procedures, including systematic chance operations, indeterminacy, acrostic and diastic ‘reading-through’ text-selection methods, and ‘translation’ between verbal texts and music, figured largely in his production of verbal, musical, visual, and performance works.” Mac Low also wrote what he called “Simultaneities”–performance works for multiple “players” (both vocal and instrumental), and if his reading-through worked to rethink notions of prosody, of the line, the performance of his work required an end to generic distance between dance, poetry, and music.

That he worked, as he said, “as an etymologist, writer of reference-book articles, copy editor, indexer, proofreader, and fact checker,” perhaps explains his attention to detail–and in his poetry he was able to render specific microscopic fragments in ways that drew attention to what is often visible but not seen.

In addition to his influence upon artists, writers, musicians, and dancers, Mac Low’s life is an index of various cultures of resistance, a radical history that puts his work as a poet in a strikingly different context from the formal movements in art with which he is normally associated.

Moving to New York during WWII, he participated in anarchist and pacifist gatherings, including discussions at the Spanish anarchist meeting hall on Broadway and weekend picnics and dances at the Ferrer colony at Stelton, New Jersey. During the war and until 1954 when it ceased publication, Mac Low was one of the contributors to, and editors of, the NYC anarchist paper Why? (later called Resistance) and in the late forties was associated with Bearsville, NY, anarchists Holley Cantine and Dachine Rainer. writing music reviews for their periodical, Retort.

In June 1955, Mac Low was arrested for protesting civil defense drills. The New York World-Telegram wrote, “The demonstrators were members of The Catholic Workers, The War Resisters League, and the Fellowship of Reconciliation, plus one man, Jackson Mac Low, 32, who said he was not a member of any of these groups.” Among those arrested were Dorothy Day, Ammon Hennacy, Bayard Rustin and Judith Malina.

In a letter of explanation to Bayard Rustin, Mac Low distinguished himself from those protesting the fear-mongering of civil defense drills: “I believe that the danger of Russian H bomb raids in the immediate future is very remote, whereas I believe the experimental explosion of A Bombs, but much more, of H (thermonuclear) bombs, constitutes more than an ‘immediate danger’ but rather is, more than possibly, an actual present producer of great damage to mankind and all his works.”

In a 1940 statement “Conscription,” Mac Low takes great pains to describe how war is not only immoral for its destruction of life, of culture, but something else as well: “What about those who are left ‘alive’ and ‘whole’? What about what happens inside them? What about the millions of ordinary men whose ideals are shattered, whose good will is soured by learning to destroy and hate, by seeing their fellow men destroyed and their own property, by being hated?”

In the last twenty years, the context for his work was internationalized as more than a dozen books, including Representative Works, Twenties and the forthcoming Doings: Performance Works (1955 – 2002), have allowed new generations of readers to discover his work.