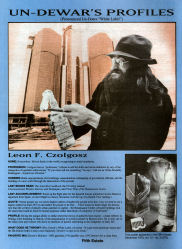 PROFESSION: Czolgosz has no “profession,” refuses to sell his skills and resists definition by any of the categories of capitalist achievement. “If you must call me something,” he says, “call me an Urban Modality Redesigner–Explosives Division.”

HOBBIES: Bank expropriations, fire bombings, assassinations, kidnapping of government officials, and the building of a new world through the destruction of the present.

LAST BOOKS READ: The Anarchist Cookbook, the US Army manual Unconventional Warfare Devices and Techniques, and Floor Plan of the Renaissance Center

LAST ACCOMPLISHMENT: Wrote up the flight plan for the Spanish Fascist politician Carrero Blanco’s departure from Spain. (A short flight in a heavy limousine over the top of a church. Poor landing.)

QUOTE: “Some people say we need a higher caliber of leaders for people to be free. I say we need to use a higher caliber (at least .357) on all leaders for people to be free…There exists no better target for destruction than the symbol of ghastly urban giantism to capital–the Renaissance Center. All such buildings foul the space that could he used for human purposes rather than those of commerce. It’ll all burn!”

PROFILE: He has the unique ability to strike where the forces of authority least expect–a bank robbery in Peking, a fire bombing in Detroit, or the assassination of a police torturer in Buenos Aires. He is only one of the many men and women who have no intention of quietly submitting to the indignities of daily life.

WHAT DOES HE THROW?: Why, Dewar’s White Label, of course. “It’s got more punch per ounce and the flat bottom helps it keep a nice trajectory. Dewar’s is tops in my book.”