Not torture but public safety

Hear what satisfied customers are saying about the x26:

“Don’t tase me, bro! I didn’t do anything”
–Florida

“It was like touching an electric fence they use, to keep cattle in, but instead of just where the initial shock goes in, the electricity goes through your entire body. It feels like every nerve cell is on fire.”
— Nevada 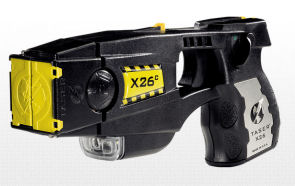 “I didn’t know what they were trying to do. I was down on the ground for a while, and after you’ve been hit with that thing a few times, you’re not thinking too straight!’
— Nevada

“The cop was still shocking me while he was putting on the cuffs.”
— Ohio

“The chief executive of Taser International refused to agree to suspend the sale of its products to countries with a record of torture by police officers in prisons and jails.”
— Amnesty International

“I basically felt like I was being raped.”
–Florida

Police tasered a 9-year-old girl handcuffed in a patrol car because she was “screaming, kicking, flailing and would not listen.”
— Arizona

A 12-year-old boy was tasered on a school bus by police after an altercation with another pupil.
— Ohio

A 14-year-old Chicago boy went into cardiac arrest and was unconscious for three days after being shot with a taser.
— Illinois

THE X26’S SUCCESS AS A LAW-ENFORCEMENT TOOL IS UNDENIABLE!

“It’s possible to use anything for torture”, says a US manufacturer of electroshock riot shields, “but it’s a little easier to use our devices!”

For more information on our amazing products visit: