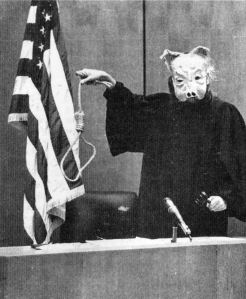 Developments in what is being called the “Green Scare” continue at a fast pace as the government increases its attack on forest, animal, and earth defenders.

Four environmental campaigners from Detroit including a Fifth Estate writer were arrested in March for eco-sabotage. Other activists around the country were subjected to the heavy hand of justice with harsh sentences and arbitrary acts. The possibilities of more arrests and indictments are on the horizon.

The Green Scare is an allusion to the 1950s “Red Scare,” which focused on destroying the US Communist Party and sympathizers. Today, the government hopes these arrests of radical environmentalists and animal liberation activists will destroy the political underground of those who use the tactic of property destruction to defend the planet.

Those arrested in the Green Scare have mostly been charged with actions claimed by the Earth Liberation Front (ELF) or Animal Liberation Front (ALF) and have faced charges with disproportionately long sentences, often life in prison. They have been labeled as “terrorists” in public pronouncements by government officials, and in the use of the new Terrorism Enhancement designation. This can be applied by a judge after a plea bargain or conviction, and can make huge additions to sentences.

No one has ever been hurt in any of their actions.

The ELF and ALF commit acts of property destruction against companies engaged in environmental destruction and animal exploitation, respectively. Despite the government’s attempts to label them “terrorists,” both groups prioritize safeguarding people, and no one have ever been hurt in any of their actions. They have, however, cost companies millions of dollars in damages and lost profits, and in return, these companies have successfully pushed the federal government to re-classify those who engage in acts of politically-motivated property destruction as “terrorists.”

In March, four Midwest activists, Marie Mason, Frank Ambrose, Aren Burthwick and Stephanie Fultz, were arrested and charged with federal crimes relating to the 1999 destruction of an office linked to GMO research at Michigan State University in East Lansing, and the 2000 destruction of logging equipment elsewhere in the state. All four lived in Detroit at the time of the alleged offenses.

As the latest Green Scare victim, Mason is charged with four federal crimes; if convicted and given the maximum sentence, she will spend the rest of her life in jail. In comparison, the average sentence for a violent offender in 2004 was seven and a half years.

Mason, 46, and mother of two, frequently wrote for the Fifth Estate in the late 1980s and early ’90s. She also was a long-time activist with Earth First! and the Industrial Workers of the World (IWW), serving on the editorial collective of the industrial Worker, the IWW newspaper, in the early ’90s when it was published in Detroit.

Ambrose, on the other hand, is representative of a different feature of those arrested: he spied on his fellow activists (including above-ground groups) and is testifying against them, including his ex-wife Mason, in return for a lighter sentence. In almost all the earth defense cases, the government has convinced activists to betray their former comrades, and in some cases, such as with Ambrose, had them wear wires to entrap others. Eric McDavid was trapped by an FBI plant calling herself “Anna.”

McDavid, one of only a handful of those accused of ELF actions to have gone to trial, received over 19 years at his sentencing in May even though he never committed an action and his group was infiltrated by a provocateur. McDavid’s two other comrades also rolled over and cooperated with authorities.

In fact, the majority of those arrested have ended up cooperating with the authorities. Excluding the recent Midwest indictees, only seven of the several dozen arrested since 2005 and charged with ELF actions have refused to cooperate: Exile, Sadie, Daniel McGowan and Jonathan Paul (who were arrested in Operation Backfire, the original round of arrests in 2005 and 2006); plus Eric McDavid, Tre Arrow, and Briana Waters.

Ambrose, however, may show a darker side than just run-of-the-mill betrayal of others. Court documents (available at freemarie.org) discuss a non-prosecution agreement regarding an amended plea, but the US attorney has refused to release information, claiming that it is irrelevant since there will be no prosecution of Ambrose on that offense. He is widely thought to have been confronted by the Feds with material from his confiscated computer unrelated to the eco-sabotage charges, and is turning in his ex-wife and former friends in order to save himself from being prosecuted on those unspecified charges.

Mason, who is not cooperating with federal prosecutors, is currently under house arrest in Michigan and is required to wear an electronic tether; a trial date is set for August 12. The other three Detroit arrestees are free on bond. Burthwick and Fultz have not cooperated with authorities, but also declined offers of support work extended to them.

In other Green Scare news, Briana Waters’ trial in Washington state ended in her conviction on charges related to her allegedly acting as a lookout during a 2001 attack on the University of Washington horticulture building. Former activists-turned-informers Lacey Phillabaum (a former Earth First! Journal editor) and Jennifer Kolar testified against Waters in return for reduced sentences, although Waters claimed that she was not present during the action. She was to be sentenced on June 2, but this was delayed because of revelations that evidence may have been tampered with. Her lawyers have indicated that they may appeal.

Tre Arrow is charged in connection with two 2001 arsons of trucks belonging to Ross Island Sand and Gravel and Schoppert Logging in Oregon. Arrow, who proclaimed his innocence, fled to Canada and unsuccessfully fought extradition for years.

In March, he returned to the US, and in June, citing the convictions of Waters and McDavid, accepted a non-cooperating guilty plea to two charges. (He originally was charged with 14 counts and faced life in prison if convicted). Arrow was sentenced to six years, but will get credit for time served for the four years he was in custody in Canada. He was also turned in by a former fellow activist, Jacob Sherman.

Daniel McGowan, one of the non-cooperating arrestees who has started serving his sentence, was moved in May from Sandstone federal prison in Minnesota. He was moved without warning or explanation, and it is not clear where he is headed. He is currently in transit as we go to press.

Lastly, Jacob Ferguson, the informant who betrayed all of his former comrades resulting in one of them committing suicide, ten imprisoned, and three on the run, was also sentenced. Having admitted his involvement in almost all the Pacific Northwest eco-sabotage attacks, the court gave him five years probation in return for his modern-day Judas impersonation. He previously received $150,000 in compensation for providing evidence against his former comrades, which included travelling around the country and interviewing them while wearing a wire in order to record incriminating statements.

In the course of the prosecutions, more incidents were made public during the sentencing period, and new indictments may be issued for these actions. If new arrests occur, the activists will certainly face the same outrageous charges (i.e., threats of life sentences) and the same attempts to publicly and legally label them as terrorists for acts of property destruction in which no one was injured. These actions are the hallmark of the ALF and ELF and one of the reasons the groups attract sympathy and support.

Activists may wish to prepare pre-emptively for such eventualities, rather than being reactive when arrests are made. It seems time to form a broad coalition of legal and activist groups, formed around a simple program of : 1) resisting the outrageous sentences that are being handed down on the basis of political beliefs, and not acts, and 2) fighting the terrorism enhancement designations that add even more years to sentences.

This would provide for a flexible coalition that could include more mainstream environmentalists, legal and civil rights groups, as well as those who support the arrested for specific political reasons.

Any attempt to reverse the Green Scare will necessarily come from the legislative and legal arenas, and alliances are desperately needed.

Based on the foregoing, Frank Ambrose stipulates and admits that the property destruction attributable to his pattern of criminal activity on behalf of ELF exceeded $2,500,000 but was less than $7,000,000. Source: Court documents.