Playing in the Key of Clown 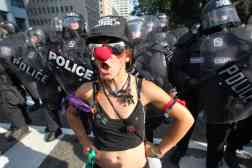 At the July 2005 Carnival for Full Enjoyment in Edinburgh, Scotland, riot police mass on the streets with shields and truncheons, fireproof armor; all very imposing. They use their shields to shove protesters, who are dancing in the street without a permit.

But these are no run of the mill protesters. They are the trained cadres of the Clandestine Insurgent Rebel Clown Army (CIRCA), which, since its 2003 founding, has been spreading across the world.

These clowns do not run, nor do they fight. Instead they engage in a bizarre form of mass improvisational, clownish civil disobedience. They stay in the street and play with the police, like one enthusiastic group of kids playing with a sullen and unmoving group of other kids. They kiss the shields of the police, leaving lipstick marks, and write on them with lipstick.

They engage in absurd conversation, even cracking up some of the police who admittedly are surprised and are not at all trained to deal with this kind of interaction. Eventually the police break ranks and leave, to the cheers of the crowd of locals and media people who have amassed to watch the action.

CIRCA began in London in 2003 with a small group of creative activists—John Jordan, Jennifer Verson, Theo Price, Matthew Trevelyan, Hilary Ramsden, Zoe Young, and myself. We collaborated to create a yeasty cocktail of nonviolent civil disobedience, clowning, Boal’s Theatre of the Oppressed, comedy improv, experimental choreography, and Rabelaisian/Bakhtinian cultural theory.

By our peak in 2005, in Edinburgh, we had 150 trained rebel clowns in a mischievous mirthful mass. Over the next few years CIRCA continued. It spread to Germany and several cities in the U.S. and elsewhere, but eventually waned as people moved on to experiment with other techniques and tactics.

Finally, even our website expired, which was a shame because it included our training manual which many activists around the world freely downloaded for a few tips and tricks. CIRCA now exists only in YouTube videos, articles and essays (and a chapter in my new book and in the social imaginary of our movements, that collection of stories and anecdotes we trade when we get together, looking for inspiration or a quick laugh.

CIRCA had several motivations from its beginning:

1) to provide a way for hardcore activists to escape burnout and rigid dogma while staying active.

2) to bring into the movement people who had been turned off by the joylessness of aforementioned dogmatic and rigid (often boring) actions.

3) to achieve tactical surprise in interactions with the state and corporations, by bringing a new, disruptive and playful form of direct action for which they were not yet trained.

4) to create mediagenic actions that would attract attention for our radical critique of capitalism, militarism, etc., both via viral internet images, and by speaking “through the media”—creating images so bizarre that even our ideological enemies would reproduce them, thus telling our story.

As Colonel Oftruth (my Clown Army name) I often was the media contact, providing the kernel of truth of our position to the swarm of media that came to cover our actions.

5) to counteract the demonization and criminalization of dissent by performing a charming, anti-stereotypical form of engagement with the public without compromising the radical content of our critique.

6) in some cases, to create a downy cushion that protected other demonstrators from repression by standing between marchers and the police; it is politically more costly to club a clown.

We were reasonably successful in fulfilling these goals during our several-year run, in several countries. We even did it with a horizontalist structure of locally-organized affinity groups (“clown gaggles”), thus walking the walk of egalitarian activism with our big shoes.

We had our flaws too; our costumes might have worked better if they were glossier and less crunchy. Perhaps the quality of our training could have been more consistent. Our mantra was, “serious, not solemn,” and we felt we could be ridiculous while still being radical, sincere without being self-righteous, stoic or stolid.

In New York City, where I moved after my time in the UK, I helped to start a local group of CIRCA that had its own method. We were less playful with the police because the NYPD were more hardcore and violent; you have to adjust your shtick to the local situation.

After some great actions during the 2004 Republican National Convention, this group morphed into an ongoing action called the Bike Lane Liberation Clowns, and their absurd, but playfully confrontational patrols, in which they confronted drivers parked in bike lanes on their unicycles, tricycles and the occasional bicycle, were a key element in the successful campaign to improve the infrastructure for bikers in the city.

There have been a series of clown-versus fascist actions across the U.S. and the world. Whether influenced directly or not by CIRCA and our training manual, doesn’t really matter. Much more important is the way this tactic replicates, perhaps independently, or through a sort of zeitgeist-of-the-radical-ridiculous. It’s the massing of clowns to confuse and surprise paramilitary/racist/rightist demonstrators.

Several years ago, a group went to the Southwest to heckle and throw off the right-wing, paramilitary Minutemen border patrol actions, calling themselves the Boredom Patrol and were pretty funny.

In Tennessee and North Carolina over the past ten years, there have been incidents in which KKK/neo-Nazi demonstrations have been met by local people dressed in red noses and wigs, with silly signs and group shtick which mock the racists. In both cases, the Nazis had no countermove. They were simply mocked and laughed at until they went home.

The intent is not to trivialize the existence of the racist far right, but to burst their bubble. Racist demonstrations are intended to provoke fear and rage, to grab attention through physical violence and confrontation. It’s part of their dramaturgy to create an angry, screaming, and hopefully violent standoff.

A racist demonstration in Sacramento, California in June 2016 resulted in violent street fighting and a number of people on both sides were stabbed. This is the kind of scrap the fascists are prepared for and excited about. It’s their strong suit.

Clowns outflank this strategy with one that bursts the heavy emotional atmosphere. The silliness, the dumb jokes, the smiling and slapstick, are not just light stuff. It’s bursting the heaviness and turning the fascist spectacle into a flaccid circus.

The Clowns perform en masse (and this is important) radical fearlessness. It’s not a macho response, but it’s not cowardly either. The red noses go right up in the fascist’s faces, fearlessly. Neither fight nor flight response, but something different. It’s a demonstration of numbers, of a defiant anti-racist manifestation, and ideally it looks fun to be part of.

More recently in Finland, a paramilitary group calling themselves the Soldiers of Odin (a sinister self-naming in this context, evoking far-right ideology), declared they were going to patrol the streets of Helsinki hunting for immigrants who they alleged were committing crimes.

A group of rebel clowns calling themselves the LOLdiers of Odin surprised the Soldiers, following them around, mocking and mimicking them and basically having fun at their expense. One LOLdier wearing a horned helmet and sporting a big beard, declared that he actually was the Norse god Odin and reached out to one of the fascists saying, absurdly, in English, “High five! !”

By doing this mocking counter-patrol, and video-documenting it on YouTube, they provide a model for other groups around the world; change the mood of the event, and also act as a clown “CopWatch,” or, in this case, “Fascist-Watch,” documenting the fascists to make sure they don’t get away with any bashings.

Radical confrontational clowning is only one item in the toolkit of the movement, and like any tool, should be used in specific situations, not overused as a default in every setting.

Sometimes the perfect response is, in fact, solemn, beautiful, haunting, serious. But when the time is right, the red nose should be prepared, nostrils flared, at the ready for deployment.

L.M. Bogad is professor of political performance at the University of California at Davis. He is the author of the books, Tactical Performance: The Theory and Practice of Serious Play and Electoral Guerrilla Theatre: Radical Ridicule and Social Movements.

He also wrote the play, “COINTELSHOW: A Patriot Act,” published by PM Press.

Bogad has performed and led workshops in Tactical Performance around the world, most recently in Egypt, Argentina, Chile, Catalonia, and Latvia.