People arrested during the January 20 Inauguration Day demonstrations are facing up to 75 years in prison as the Trump administration is bringing the hammer down on protests. 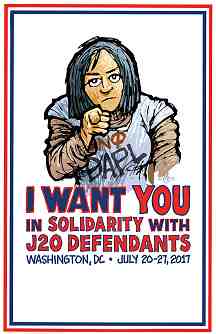 This is being met by an organized legal pushback on the part of the defendants, and by increased solidarity actions.

On January 20 (J20), thousands of people went to Washington D.C. to oppose the inauguration of President Donald Trump. While the day’s events were largely overshadowed in the mainstream media by the Women’s March on January 21—which drew hundreds of thousands of people to the capital—January 20 was an inspirational day of resistance.

Amidst the blockades, marches, and other forms of protest that took place, approximately 230 people were arrested for allegedly participating in an anti-capitalist and anti-fascist march.

Within half an hour, police attacked the march, indiscriminately using pepper spray and other crowd control weapons against the crowd. Eventually and without warning, the police cordoned off an entire city block—and as they have done multiple times before in D.C.—arrested everyone trapped in that space.

Unlike previous mass arrest cases in which charges have been typically dropped or substantially reduced, the J20 case is set to continue for the next year and a half with the prosecution escalating the repression rather than backing away from it. Despite a preliminary report from the Office of Police Complaints that questioned the Metropolitan Police Department’s conduct on Inauguration Day and a lawsuit from the American Civil Liberties Union (ACLU) that charges serious mistreatment and violations of constitutional rights, the state is using the J20 case to make it clear that disruptive protest will be met with harsh consequences.

The group of 230 was originally charged with one count of felony rioting, an unprecedented charge that was applied across the whole group. Journalists, medics, legal observers, and random people swept up were all charged with the same acts.

Phones were seized and hacked by the government and Facebook accounts were subpoenaed as part of the investigation. While charges against some journalists and legal observers were dropped, the majority of the group was re-indicted on April 28 with eight felony charges: rioting, inciting to riot, conspiracy to riot, and 5 counts of property destruction.

However, just as the march the defendants are accused of participating in was animated by a spirit of defiance and solidarity, defendants—most of whom did not know each other beforehand—are working together to respond to these charges in a collective way.

Over half of the defendants have signed a non-cooperation agreement pledging to each other that they will not cooperate with the state against their co-defendants. Defendants are actively coordinating legal strategy and working together to fight the charges. Many have also pledged to reject plea agreements.

Alongside these efforts, supporters have come together to help defendants with everything from fundraising to finding defendants housing when they are in D.C. The outpouring of support shows the anarchist movement at its best and it is that baseline of solidarity that makes it possible for people to undertake courageous actions in the street.

Another way in which this solidarity has manifested itself was a “Week of Solidarity” held from July 20 to July 27. Across the United States, from small cities such as Carbondale, Ill. and Ypsilanti, Mich. to larger ones, supporters held fundraisers and informational events. The week was designed to raise the profile of the case.

In a lot of ways, the prosecution has been able to continue because it has received so little attention. Against this silence, during the week supporters focused on new outreach efforts including call-in campaigns demanding that the charges be dropped, postering and leafleting, and more. It was a chance for people to come together and refocus their efforts and start considering what it means to build support and resistance over what is going to be a long-term fight.

The stakes in this case are high, both for the defendants, and also for anyone who chooses to resist in a way that attempts to move beyond symbolic acts.

It is part of the ongoing escalation of repression that has been directed at social movements since 9/11, with the Green Scare, the NATO 3, the Cleveland 4, and many other cases that have sought harsh penalties against participants in a range of different movements.

The J20 case—along with newer efforts such as state-level legislation designed to further criminalize protest and enhance penalties for disruptive protests—are part of these ongoing attacks on social movements.

The first trial dates have been set for November of this year, with a few more happening in December. However, the bulk of the defendants will not be tried until well into 2018. Defendants continue to need a lot of support, with everything from donations for ongoing travel and legal fees to general outreach and awareness raising. In many ways, this case is an important test of both the government’s ability to stifle resistance and our ability as movements to respond in a way that keeps our comrades out of prison and builds solidarity.

Anonymous remains so due to the nature of the current political repression. They are a defendant in the cases stemming from J20.

For ongoing updates on the J20 case, visit defendj20resistance.org