The man in the “Fuck the Draft” poster

In 1968, Kiyoshi Kuromiya designed this poster and sent orders by mail. He was arrested by the FBI and charged with sending indecent material through the Post Office. Later that year, after beating the charges, Kuromiya defied the authorities by handing out 2000 of the posters at the Chicago Democratic Convention.

The photo is of Detroiter Bill Greenshields was taken at random during a 1967 March on the Pentagon and used by Kuromiya. Although the FBI hounded Greenshields for draft card burning, he remains unrepentant.

The man in the “Fuck the Draft” poster, Bill Greenshields

DM: So let’s start at the [Pentagon] protest itself. Do you know who shot the picture? 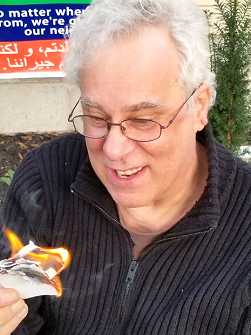 Bill Greenshields: I have no idea who took the picture or how I was selected to be on a poster. I had no knowledge of it until an article in the May 1968 The Fifth Estate.

DM: The look on your face in that poster is a little demented. BG: Yeah, like there’s this GLEE of some kind! That’s probably why it was selected, but you gotta remember, I had just climbed this rope after walking from the Lincoln Monument to the Pentagon, and so I probably WAS really enjoying burning that card at the time.

The full interview is at DangerousMinds.Net.