An anarchist operetta set in Taiwan 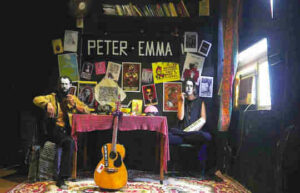 During the worldwide youth revolt in 1968, Lenny Kwok was a 13-year old Hong Kong high school student handing out radical pamphlets with his friends. He got busted, but it didn’t stop him from continuing to agitate for anarchism.

Flash forward 53 years, and Lenny is still at it. He has spent a life-time as a Hong Kong anarchist/artist/musician/singer/author, but now lives in Taiwan following repression from the Chinese government.

He recently wrote and performed in Peter & Emma’s Bookcafe, a brilliant, entertaining and ground-breaking Chinese anarchist operetta inspired by the lives of Peter Kropotkin and Emma Goldman. The project was born as a creative anarchist response to the current pandemic.

In 2019, Lenny was visiting Taiwan to present a political performance and art exhibit, 9 Songs: a sonic documentary for social struggle. Hong Kong was going through major social upheavals at that moment. Then, COVID hit. In a humanitarian gesture, Taiwan extended the stay of all foreigners, including Lenny. But the extension did not automatically grant permission to work on the island. Lenny needed to find a sponsor who could help him obtain that permission. Thankfully, a local theatre company, Against-again Theatre Troupe, commissioned him to create something for them.

Lenny never planned to move to Taiwan, but found himself stuck there. Curiously, he had thought of shipping his personal library to Taiwan to start a new anarchist book café, but wondered who would really be interested? His predicament inspired him to write the operetta centered around two well-known historic anarchist figures, Peter Kropotkin and Emma Goldman. In the show, they meet by chance in modern day Taipei, and together decide to start a bookshop. According to Lenny, “Few in Taiwan know anything about Peter or Emma, including those in the young theatre company. But once I explained their historical significance on the world stage and the development of anarchism, they thought it was a great idea and fully supported me.”

The storyline follows Peter and Emma stuck in Taipei during the COVID pandemic wanting to do something worthy instead of wasting their time. They search for a place to open a bookshop/cafe where people can gather, something typical of 1930s Berlin and Paris. In the operetta, friends drop by, including a farmer, a baker, a sex worker, and an overseas student to meet up, share stories, ideas and solidarity.”

In between scenes filled with these ordinary, but rich conversations, Lenny introduces relevant historical elements. Since Emma wrote about child labor, the actor portraying her tells a story of a Chinese child worker in the 1930s. Lenny reads an excerpt from Kropotkin’s An appeal to the Young. Elsewhere in a song, Alexander Berkman, once Emma’s lover, writes to her to ask for money to buy a gun for an assassination attempt. Emma finds herself torn whether to send the money.

The baker friend studied cuisine in Italy and arrives on stage with fresh baked bread to share with the audience during the performance. Over drinks in the book café, the characters discuss the explosive situation in China and Hong Kong historically and today.

Live music, song, witty dialogue, historical anarchist references, debates, Asian history, and interactions with the audience are all part of the operetta performed by Lenny, his partner, June, and a group of friends. They hoped to tour Taiwan with the production, but the pandemic worsened, so they canceled their plans.

Peter & Emma has only been performed twice in Taipei both times at The Witch House, a famous feminist pub. “In Taiwan, we have the right to free speech and freedom of expression, so we can talk about anything,” according to Lenny. “The audiences loved it and gave warm, energetic and enthusiastic responses to the show”

The operetta is a first for Lenny in his decades long and remarkable artistic career, but part of a continuum of work dating back to his early activism in Hong Kong and his legendary anarchist cabaret band, Blackbird. [See Hong Kong: Where Anarchists & Blackbirds Sing About Freedom, FE #381, Summer-Fall 2009.]

Active from 1984 to 2004, Blackbird played a vital role in the Asian and international underground music scene with seven albums and many compilations, their tours, documentary films, and publications.

Blackbird’s roots, like Lenny’s, date to the 1970s when they were part of The 70s, a Hong Kong anarchist group “opposed to both Western capitalism and the Chinese state-capitalist bureaucracy.”

The ’70s operated a radical book and print shop and published revolutionary writings from Bakunin to Rosa Luxemburg. When a core member of the group shared his observations and experiences after travels abroad meeting international anarchists, the ideas and practices of Judith Malina and Julian Beck’s Living Theatre resonated with the Hong Kong comrades.

They started the People’s Theatre in the early 1980s, saying they intended to “vulgarize the bourgeois notion of theatre,” maintaining that “common people can do theatre as well,” vowing to “disregard the standards and aesthetics of theatre,” and their live shows reflected this.

Lenny started Blackbird to perform together with the theatre troupe. The band and the People’s Theatre of Hong Kong boldly staged their political multidisciplinary shows regularly around university campuses. The dynamic and provocative, twelve-person anarchist performance unit caught the attention of local media and soon became a cultural phenomenon.

“Besides theatre and music, our shows were also multi-media events with videos, installations and performance art,” Lenny says. “We smashed TVs on stage and used different dramatic tactics.”

Lenny and friends attended the 1984 Venice International Anarchist Gathering and made a film of their experience. According to Lenny, “The Venice gathering was like my baptism in anarchism, instrumental in consolidating my position as an anarchist, and living my life accordingly.” He met anarchist writers like Murray Bookchin, Albert Meltzer, and Ronald Creagh, “my anarchist elders.”

In Taiwan, as in Hong Kong, Lenny continues to write, play music, and work on documentaries doing his best to “survive as an anarchist without being employed officially by any institution.” (A documentary version of the operetta, “Peter & Emma’s book café” with English subtitles will be presented online at the 2022 Montreal International Anarchist Theatre Festival in May. Details:
https://www.anarchistetheatrefestival.com/en/post.php?s=2022-04-21-montreals-15th-annual-international-anarchist-theatre-festival

Norman Nawrocki is a Montreal troublemaker. His last play was Run Nawrocki Run! Escape from Banff Prison. His latest book is The Legend of the Rat King. His last album is Displaced/Misplaced. Pre-pandemic, he toured the world with his music, theatre & books. He’s always been an anarchist.