Peter Lamborn Wilson is best known for the book TAZ.: The Temporary Autonomous Zone, Ontological Anarchism, Poetic Terrorism, and rightfully so. Written as Hakim Bey and first published by Autonomedia in 1991, many of the texts in TAZ had circulated for years in the ’80s zine underground. 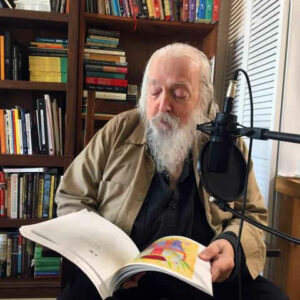 Drawing inspiration from the Situationists, classical anarchism, continental philosophy (Lyotard’s Driftwork, Deleuze & Guattari’s Nomadology), pirate utopias, the American communitarian tradition, and dropouts of every sort, Wilson did not invent the TAZ—he just gave it a name.

The book and the concept of the TAZ served as a sort of lightning rod. It received ringing denunciations from some quarters (Murray Bookchin dismissed it as lifestyle anarchism) and was a source of inspiration for generations of rebels and anarchists who did not want to wait for the revolution to have experiences of freedom and autonomy in their lives.

It informed the philosophy and tactics of Reclaim the Streets, the squatters movement, Burning Man, Occupy Wall Street, radical environmental camps, and the anti-Globalization movement. Anarchists, punks, ravers, hackers, activists, dropouts, and revolutionaries of many stripes took what they wanted, magpie-like, from an inspired and colorful text.

The Z.A.D. (zone à défendre) in France, and the Capitol Hill Autonomous Zone in Seattle are just two of the recent manifestations that drew inspiration from TAZ. It is a book that has left its stamp on anarchist tactics and direct action and continues to be discovered by new generations who re-imagine it for the present moment.

Peter Lamborn Wilson was an anarchist, author, poet, independent scholar, and visual artist. His work did not stop in the 30+ years since TAZ was first published. Although his ideas evolved over the years, he never turned his back on the TAZ concept, nor did he mind when younger generations took it to very different places than he would have.

Wilson was a student radical and a classics major at Columbia University before dropping out in the mid-1960s. He spent time at Timothy Leary’s Millbrook LSD estate and participated in the psychedelic churches movement. In a memoir, he recounts his attempt at being an anarchist bomber, which failed when his bomb fizzled.

Disillusioned by the failure of revolution in America, he traveled to Afghanistan and India, seeking initiation into various spiritual traditions. Eventually ending up in Iran at the Imperial Iranian Academy of Philosophy, he edited their English language journal Sophia Perennis, studying (and practicing) Iranian Sufism, and translating Sufi and Ismali poetry from Persian. This exploration of the heterodox edges of Islam continued after his forced emigration from Iran after the revolution in 1979.

Returning to the United States in the 1980s and settling in New York, Wilson reconnected with the anarchist movement. He was instrumental in the reinvigoration of the Libertarian Book Club. Using the original sense of libertarian (i.e., anarchist), the LBC was originally founded by Sam and Esther Dolgoff in 1945. Wilson and a new generation of anarchists connected with the Dolgoffs and many other old timers who had known Emma Goldman.

Another active member of the LBC at the time was Frank Brand (Enrico Arrigoni), a fascinating Stirinerite illegalist anarchist who was a veteran of anarchist struggles in Italy during World War I. Wilson wrote about Brand and was instrumental in getting his memoir (Freedom: My Dream) republished in 2012.

Wilson also inherited a radio show on the venerable radical New York City institution, WBAI. Beginning in 1987, The Moorish Orthodox Radio Crusade was a vital source for information about anarchist and subcultural activities in New York. Wilson went through his mailbag live on-air promoting the vibrant blossoming of radical ideas happening in the zine scene at the time.

Announcements were made for upcoming episodes of Tuli Kupferberg’s anarchist TV show, fundraisers for various causes and upcoming protests. Reports from the crumbling Soviet bloc, long form interviews, and fascinating music were mainstays, along with reports from co-host Bill Weinberg about the Zapatista uprising in Chiapas and other hot spots in Latin America.

At the same time, Peter was a member of the editorial collective at Autonomedia publishing, and a co-editor of its New Autonomy series. Many readers first encountered the work of John Zerzan, Silvia Federici, Steve Abbot, the Critical Art Ensemble, Jacques Camatte, Th. Metzger, or Bart Plantenga through that series. Autonomedia was publishing the journal Semiotext(e) at that time, and Wilson co-edited two very important issues.

Semiotext(e) USA (1987) was the first book length exploration of the 1980s underground zine scene, and brought together a wild array of voices from zines ranging from totally obscure figures to well known literary ones like William S. Burroughs and Allen Ginsberg. Later, through Ginsberg, Wilson taught at the Jack Kerouac School of Disembodied Poetics at the Naropa Institute in Boulder, Colo.

Recordings exist of all the courses he taught and faculty readings. They are worth checking out to get a feeling for Wilson’s gift of gab. He was a tremendous speaker—funny, charismatic, extremely knowledgeable about a wide range of topics—in any context. In lecture hall, radio broadcast, or face-to-face conversation, Wilson was a natural.

At Naropa, he befriended Shaman-in-residence Harry E. Smith, the legendary curator of the Anthology of American Folk Music and film maker. Wilson inherited the challenge of editing Smith’s Naropa lectures into book form, one of several yet-to-be-published book projects.

Semiotext(e) SF (1989) brought together many of the same voices from the zine world with many of the most radical voices in (professional) science fiction. These connections to the science fiction world had developed through Wilson writing anarchist-themed science fiction stories for both amateur and professional publications. He wrote six or seven short stories around this time, most of which were collected in his book False Documents (2016). He also has a lost sci-fi novel, Hunter’s Moon.

A second volume of sci-fi-inflected fiction was published in 2017, Night Market Noodles. Through an unlikely series of events (and tech savvy friend, Joseph Matheny) two of these early stories moved onto BBS boards and the Internet, morphing into Ong’s Hat, the first alternate reality game (ARG).

Wilson was actively involved in anarchist agitation against the colonialist celebration of the quincentenary of Columbus’s journey and subsequent genocide. One of the things that came out of this agitation was the influential collection Gone To Croatan: The Origins of North American Dropout Culture, which documented the hidden history of resistance to colonialism in North America.

It brought together an all-star cast of radical scholars, scholarly radicals, activists, and artists, and provided tangible evidence that “another world is possible,” and it was there the whole time if you just knew where to look. Wilson helped conceive of the project and assisted co-editors Ron Sakolsky and James Koehnline to bring the volume together.

There is no complete bibliography of Wilson’s work, but his Wikipedia page lists 56 books. He was a prolific writer in many different subjects and the very model of an independent radical scholar.

Wilson was a historian, promoter, and participant in the American communalist tradition. He was a radical historian of piracy in the tradition of E.P. Thompson, Larry Law, and Marcus Rediker. He wrote historical work about anarchism, eugenics, the fringes of Free Masonry, entheogens in Ireland, the last stand of classical Paganism in 5th century Egypt, contemporary art, and was a well-respected poet with 20+ published volumes.

He was a regular figure in the anarchist press, publishing extensively in the Fifth Estate and various zines and micro publications from the 1980s until his death.

Later in life, despite poor health, Wilson remained enthusiastic about the Kurdish struggle, and edited a volume about the Rojava Revolution. He was passionately interested in Indigenous resistance, soliciting information about, and raising money for Wet’suwet’en land defenders in so-called Canada.

He lived out the last years of his life in upstate New York in poverty, surrounded by piles of books, manuscripts, letters from his vast numbers of correspondents, objets d’art, strange religious artifacts, and many friends.

Peter Lamborn Wilson was a brilliant mind who was generous with his time and encouragement. He was a scholar dedicated to human liberation, a lifelong anarchist (from the age of 12, converted by George Herriman’s Krazy Kat) and one of our few truly great anarchist literary figures.