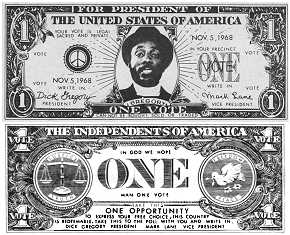 WASHINGTON, Oct. 29—The U.S. Treasury Department ordered the confiscation of perhaps the most unusual piece of campaign literature in use as the electoral farce drew near its completion.

Treasury agents broke into the New York Dick Gregory for President headquarters and seized all the Gregory campaign “dollar bills” they could find. Agents were reported scouring Chicago for the contraband material.

The reason given by the government for the seizure was that “hippies and other irresponsible young people have been using these in the dollar bill changing machines.”

Although the design of Gregory’s bills closely conform to the Treasury Department’s Printing office specifications, the government objected to two changes in the design: instead of the traditional U.S. bald eagle, there is a peace dove, and in place of the picture of George Washington there is a picture of Gregory, making him the first black man ever venerated by having his picture on U.S. Currency.