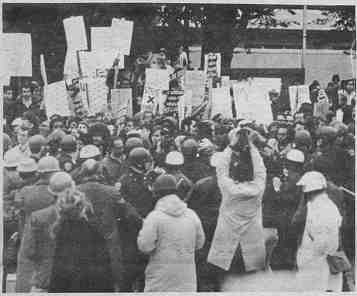 Mass arrest, the one previously missing ingredient, was finally added on Thursday, Jan. 23, when over 400 people were busted while trying to hold an “illegal” on-campus rally.

The scenario at State has included almost everything else: students, teachers and employees on the picket lines, many bandaged heads, patched eyes, and boarded windows; marching squads of tactical police appearing unexpectedly around the corner.

Every day rows of cops and circling picketers form a tension-force field, through which pass the oblivious, impassive, or occasionally antagonistic scabs. Intermittent scuffles only intensified the continuous battlefield atmosphere.

On Thursday, however, the crowds were swollen and unusually anxious: at noon, the first attempt in weeks to defy the ban on campus demonstrations would happen. With the inevitable National Guard helicopter hovering overhead, and groups of policemen appearing on roofs, demonstrators began leaving the picket lines to mass on campus as the hour approached.

The rally started promptly at 12 noon. Roger Alvarado, a leader of the Third World Liberation Front, opened the meeting: “We’re here to teach them what the power of the people means.” Response from the thousand pressed around the speaker platform: “Power to the People! Power to the People!

“I am a representative of Dr. Hayakawa, President of San Francisco State College. According to Section 402 of the California State Penal Code, this conduct constitutes an unlawful assembly. In the name of the people of the State of California…”

“Fuck you! We’re the people! Power to the People!”

“…I order you to disperse or be subject to arrest…”

Another five minutes and a long line of blue helmets ringed most of the quad. Phalanxes of tactical police stepped out of hiding to march from several directions on the defiant crowd. Suddenly, the cops burst from their tight formations and charged, breaking the demonstration into big clusters of hurriedly shifting people.

When the brief surge settled, everyone realized at once that the pigs had surrounded the central core, of the demonstration at the speakers’ platform. Tension built while waving clubs held back the entrapped people and deterred those who would join—or free—them.

Several times the police mounted short charges to move the larger groupings away from the encircled center. Once a short, bespectacled, Japanese student was caught behind their lines; setting himself in a karate crouch, he fended off the blows of two attacking pigs, chopping his way to safety behind the slashes of his powerful hands.

Goaded by the sight of the helpless group snared at the platform, several hundred demonstrators broke for the library, sending the thin band of pigs guarding the entrance fleeing before them into the building. Billiard balls and other missiles shattered the glass doors before cop reinforcements cleared the area.

Now police vans began driving across the walkways to pick up the captured vanguard. It became obvious that the authorities had already decided upon mass arrests. Slowly, one by one, people were plucked from the group, frisked, photographed, and shoved into wagons.

So many captives were taken that a bus had to be pressed into service. Long skid marks were streaked along the walkway by van drivers, who would accelerate madly, swerve wildly, and then slam on the brakes, tumbling their despised passengers inside the wagon.

The final bust totals were somewhat sobering. Some 480 people were taken into custody, including most of the student leaders and various members of the American Federation of Teachers, among them Dr. Nathan Hare, acting chairman of State’s Black Studies Dept. Most were charged with misdemeanors, such as unlawful assembly or failure to disperse; several charges of felonious assault on a policeman were also leveled.

In the jails, Thursday night, fire hoses were used against women demonstrators who, after refusing to provide information beyond name and address, persisted with chants and banging when officials began harassing individual girls. Five fire trucks hurried to the men’s jails after a mattress was set afire.

The big bust will probably initiate a new and more militant phase to the strike. Previously, a total of 189 persons had been arrested, never more than 10 or 20 in any single action. Now, the pace may accelerate.

Since classes resumed following the prolonged Christmas vacation, massive campus demonstrations had been avoided while increased community support was being mobilized. The AFT local at S.F. State gave a New Year boost to the strike by staging its own walkout. While ostensible labor grievances were cited, it was generally understood that the teachers struck to support the students and to prevent more bloody clashes with the police.

The San Francisco AFL-CIO Labor Council played along with the charade and granted recognition to the strike, as involved genuine labor issues, its action was legitimate.

The AFT was able to muster enough pressure to gain this endorsement, even though the striking teachers set the precondition that they would not open talks themselves until the trustees had negotiated with the students.

Governor Reagan’s threat to fire striking teachers was enough to bring the labor council around.

The Labor Council has leaned heavily enough on Mayor Joseph Alioto to cause him to moderate his original opposition to the students and faculty strike. Now, Alioto takes the safely neutral position of blaming Reagan for the S.F. State situation.

George Johns, secretary of the Labor Council, has gone much further in putting the heat on Reagan. In a statement on Thursday, he asserted that “there can be no doubt the governor is single-handedly in control of dealing with the instant situation. Next week we will reach a point of no return. If he cannot [deal] by then, this college obviously must go down. This is a simple act and no threat.”

It seems, then, that the radical strike at San Francisco State College has produced the very unique accomplishment of splitting the power structure down its political seam.

Uncomfortable as many of them may feel, liberal elements recognize that their best strategy is to defend and therefore utilize the strike as a political issue against Gov. Reagan and the right-wing clique. Radicals, of course, can only benefit by such a cleavage.

Already, the benefits of wider support are becoming apparent. Union members have refused to cross AFT picket lines to service the state campus. Some of the school’s workers have come together in their own Organizing Committee and have proclaimed their own strike.

The results are visible. Classroom attendance has consistently been below the dormitory food service has been discontinued. The library, hampered by striking staffers and a determined effort to scramble the shelving process, is increasingly useless.

The Hayakawa administration and the Reagan-inspired Board of Trustees (which dominates all 18 California state colleges) remain intransigent, but the tide is running against them.

They cannot win, but they can continue to resist, and it is entirely possible that S.F. State will be shut down indefinitely.