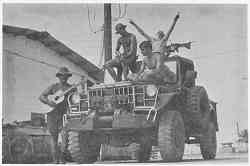 Your paper has done so much for our heads simply because it is so meaningful.

We would like to add just one thing for your other readers: “Respect the Revolution and you shall inherit the earth.”

I was in your town the past week and got caught up in the action there. I’m from Pittsburgh where there is absolutely nothing happening. And I mean nothing!

I was glad to be able to see Mr. H. Wolf (who I’ll see again in Ann Arbor) and the dynamite Ten Years After. Your town is lucky to have several good FM stations. I go to Parsons College out here in Iowa and the only news we get is the LA Freep and now we will get the Fifth Estate.

Two of the articles from your last issue struck home. The first was “Uncle Sam Cereal” [FE #83, July 10-23, 1969] which we ran across in the local supermarket and have hanging in a collage and the second was the No Dope comment. We here are also plagued by the same problems. However there’s a certain amount of road apple red loco weed that grows wild in this area and if treated with a certain substance will produce good results.

I’ve enclosed the three dollars and hope the man doesn’t bust things up. Good luck to a good and growing paper. Peace and Freedom.

The interview with Anarchist Murray Bookchin in your last issue [“The Anarchist Revolution,” FE #84, July 24-August 6, 1969] I enjoyed. Except for one item which virtually Bookchin, omitted in his explanation of Anarchism, is the principal ingredient of what Anarchism, libertarianism, is all about.

This item is sex.

While Anarchism (as Bookchin very well elucidates) is anti-statism, this anti-statism must encompass anti-sex-repressionism. The authoritarian state (and any state is authoritarian) and sex-repression are in terms of each other. Weaken one and you weaken the other uphold one and you uphold the other. Born together, historically growing up together, they’ll topple together.

We speak of a sexual revolution. Where? (other than girls now consenting to go to bed with a boy before marriage). Nor can there be such a revolution unless and until the state is eliminated and replaced by a string of voluntary associations like, say the world postage system, which has no central administration but carries on beautifully.

From the Ice Age to World War II—this vast period may be considered the Age of Scarcity. It offered at least a good excuse to keep play to a minimum, to be serious, ascetic, duty-bound, disciplined (“Drop your cock and grab a sock!” as shouts the army sergeant 6 a.m.) and work, work—Gospel of Work. Else how, during this Age, would the land be cultivated, the crops harvested, the shelters built, etc.?

Today, post-World War II, the Age of Scarcity is definitely and definitively at an end, the sole remaining economic problem being one of world-distribution rather than production.

So it’s back to play we go! Or should go, or could go, except for that Ice-Age old man standing in the path—the icy state. It, like god himself, is jealous as hell and will brook no rivals—like lovemaking outside its bounds, laws, sacred decrees, It, as Marxists appreciate, is the executive-committee of the capitalist ruling class. But, it, as they have yet to appreciate, takes on and carries on, particularly in the 20th century, a life of its own—or rather non-life—a domination and dominion of its own, a “1984” of its own, and itself constitutes at least as much a ruling group as the capitalists do.

Meanwhile its periodic rejuvination, its “health,” its periodic war. But war—plus extreme-statism known as Hitlerism or Stalinism—are only other names for love-vacuum, sex-vacuum, play vacuum. (How best to deal with Hitler would have been to pull his pants down).

Just a word of thanks to you and all those associated with The Fifth Estate. You have some fine writers, as well as excellent articles. Even my “Boss,” (SSgt.) digs it.

So maybe there’s “Hope” for the heavies. But, of course, that’s just one. The majority of them, “just can’t understand this generation.”

How can they? They’ve been living in the military power structure so long, the only things they do know is what their “superiors” tell them.

It’s really too bad. But, they were gifted with a free will, just as I. I’m only sorry that they’re satisfied with their lives, to be a Sgt. in the U.S. Marine Corps. And that really isn’t much of a life.

The heads in MAG 11 are pullin’ for you.

Thanks—for revealing the dangerous and misleading pits of society. There should be more news media like yours interested in the welfare of mankind than in their own political advancement.

Truth has been exposed, new approaches have been introduced and as for me, the book of reality has unfolded its pages wisely. Let us hope that many more will be influenced by your pages of true reality.

To the Fifth Estate,

The eve of the Grande benefit for John Sinclair I happened to wander into the forbidden alley outside the Grande looking for a stray chick who hadn’t appeared for over two hours. The time was 10 pm and the Tactical Mobile Unit was lurking around in the parking lot looking for the evil devils who seem to relate to this revolutionary concert jazz.

I pity the poor fool who approaches them for assistance.

As I stood witnessing the shakedown of a black brother who was selling the Fifth Estate I suddenly got the urge to go to his assistance. Needless to say this was a bad sort of judgement for I soon found myself in the backseat of the TMU with arms handcuffed behind.

These TMU wonder boys began vamping on my body and terrorizing my mind to a point where I was driven into exile from the rationale. After a quick check with the FBI to confirm my name on the subversive list and after several threats of being locked up for resisting arrest, I was finally released on Grand River about one mile from the Grande Ballroom.

Last words from the TMU were “You think the Chicago Pigs were bad just wait till we take to the streets.”

Thank you very much for sending the Fifth Estate these past months to me in Nam. It’s helped keep me sane this year.

As I’ll soon be home, you can terminate my free subscription. Of course, I’ll continue to buy the paper in the States.

I am now in my tenth month here “abroad” the floating bandaid (USS Repose). My existence here on the ship has given me my most saddest, darkest and heart breaking days of my life.

I’m an operating room technician and I assist the surgeons in surgery. Every day I see the products and tragedies of this unjust, cruel and immoral war.

Too many times I have seen an arm or leg tossed into a trash bag.

Too many times I have seen a bilateral amputee come out of surgery with the hope of life only to die two days later of gross infection in a strange and lonely hospital ward.

I am so sick of the needless slaughter of my brothers. I am so sick of seeing my brothers come out of surgery a living vegetable, and then having a superior officer cite the classical eulogy, “You’ve done a fine job my son and your country is proud of you. The fighting is over for you now.”

BIG FUCKING DEAL! I doubt very seriously that this statement will bring comfort and reward to this man’s life, if he still has the mental powers to rationalize.

Man has given himself war and only man can take it away. Listen brothers, and listen carefully—to pray for peace is a dream, but to work for peace is reality.

A Confined But Fellow-Worker for Peace