The office was surrounded at 5:30 a.m. by a force of between 300 and 400 police. They were refused entrance to the office. They began to break down the front door, but were driven away by shotgun fire; two cops were wounded.

A large group of police took up positions in a four-story office building opposite the Panther office (rented the previous month by the Department), and started firing with automatic rifles and tear-gas grenade launchers into the office. Twice, they lobbed dynamite bombs onto the roof. Inside, 11 Panthers wearing gas masks and bullet-proof vests were firing with two Thompson submachineguns, shotguns and rifles. A third cop was wounded.

At 10:00 a.m., a white sheet was hung out one of the front windows of the office, and the Panthers emerged one by one, unarmed, with their hands over their head. According to David Hilliard, Panther Chief of Staff, three women who were among the 11 Panthers in the office were beaten after their arrest, one had her clothes completely torn off. One of the women, six months pregnant, is thought by doctors to have “probably” suffered a miscarriage.

There were walkouts from three high schools protesting the attack. A walkout from a fourth high school, Manual Arts in South Los Angeles, was prevented only by police surrounding the school and blocking the doors.

SAN FRANCISCO, Dec. 8—At about 5:30 p.m., large numbers of police surrounded both the Panther national headquarters in Berkeley and the office in San Francisco, as well as several Panther apartments. According to Hilliard, who was released that morning on $30,000 bail, the situation was “tense” for about two hours. By that time, large groups of residents in the neighborhoods of both offices congregated outside police lines. After a time, police withdrew. Continuous vigils of between 100 and 300 neighbors are being held around both offices, to protest the national pattern of attacks on the Panthers, and to insure that there will be large numbers of witnesses of any police attacks on the Bay area offices. AFTER the Los Angeles attack, Democratic State Senator Marvin Dimely, elected from the ghetto, went on local TV to denounce “national attacks on the Panther Party.”

He emphasized that the Panthers “would never shoot first” at police, and rather than constituting a threat to the community, “are doing very good work and are of enormous benefit to the community.”

He said the Los Angeles Panther office had been heavily harassed by police for three weeks prior to the attack, and that had he personally been subjected to such harassment, he would arm himself, and that if he were attacked, he would defend himself in the same way: “They are perfectly within their rights,” he said. 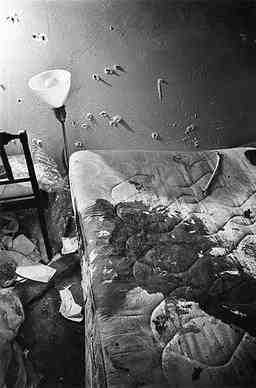 The photograph above is of the bed in which Illinois Black Panther Chairman, Fred Hampton, was machinegunned in his sleep by Chicago police. The murders of Chairman Fred and Mark Clark, and the wounding of three other Panthers in a dawn raid on an apartment near the Panther office, set off a national pattern of attacks and arrests.

The State Attorney and police account of the attack is this: about 5 a.m., police went to the apartment with a warrant for stolen guns. According to Sgt. Groth, who led the raid, information was supplied by an informant who said he had seen the guns there. Police knocked, announced they had a warrant and requested admission to the apartment twice. They then forced entry through the outer door. A Black woman beyond an open inner door then opened fire with a shotgun. Groth and others returned the fire. Mark Clark was killed standing behind the inner door. Police came in the back and opened up. Groth, fearing police would hit each other in the cross-fire, called a halt to the shooting. He ordered the Panthers to come out with their hands raised, they shouted back, “Let’s shoot it out.” Firing resumed, Groth again called a halt, but was answered with the same challenge. After a little more firing, the Panthers surrendered, and Fred Hampton was found dead on the bed.

An integrated organization of Chicago police, the Afro-American Patrolmen’s League, has denounced the killing of Hampton and Clark as “political assassination.” According to the results of a second autopsy by a pathologist formerly employed by the Cook County Coroner’s office, Hampton was machine-gunned in the back of the head. Bullet-holes at the scene of the attack indicate there was little firing by the 11 Panthers in the apartment; there are no bullet-holes on the police side of the hallway into which Panthers are alleged to have been firing. There are no bullet-holes that could have been made by firing from Hampton’s bed.

These latest of 28 Panthers killed by police since January, 1969; these latest of more than 300 Panthers arrested during the last two years, are unmistakably part of a national pattern of political repression against-the Black Panther Party.