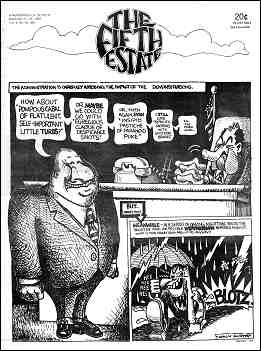 Caption for Panel 1: The administration is carefully assessing the impact of the demonstrations.

Or MAYBE we could go with “egregious claque of despicable snots.”

Or, then again EVEN “insipid pastiche of paranoid puke.”

I STILL like “syphilitic morons with shit for brains…”

On the other hand…

Caption for Panel 2: But, what’s this? MEANWHILE–in a series of daring nighttime raids, the sinister and incredible WEATHERMAN strikes again!!!

What is this crazy bastard up to, anyway?